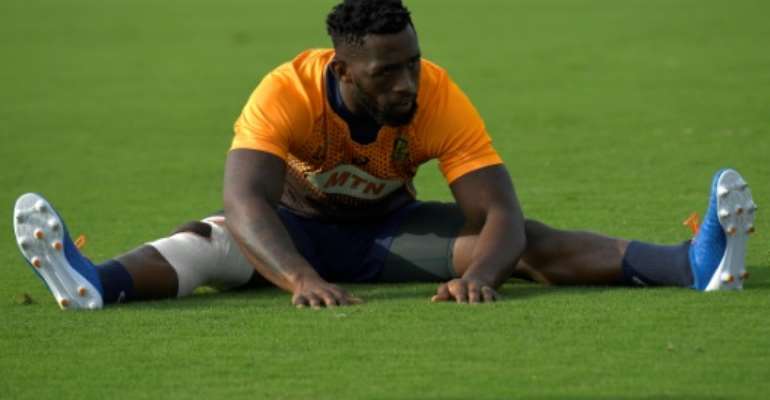 South Africa captain Siya Kolisi is uncertain what to expect from Canada. By Filippo MONTEFORTE (AFP)

South Africa captain Siya Kolisi accepts his side will be taking a leap into the unknown when they face Canada for the first time in nearly 20 years as they look to book their place in the World Cup quarter-finals.

A bonus-point win for the Springboks will all but assure the two-time world champions of entry into the last eight.

Tuesday's Pool B match at the Kobe Misaki Stadium will be just the third time the two countries have met, and the first since South Africa's 51-18 victory over Canada in East London in 2000 -- when current Springbok head coach Rassie Erasmus was playing for the home side.

Kolisi, who will be starting his third match in four games as he continues his return to match-fitness after a knee injury, said a South Africa side showing 13 changes from the team that beat Italy 49-3 last time had to focus on their own performance.

"We always look at our previous game to see where we made mistakes or where we can improve, and obviously you look at footage of the other teams' attacking plays," Kolisi told reporters at the ground on Monday.

"It doesn't really matter, but it is easier to play against a team that you've been playing for a long time, so we don't really know what to expect from the Canadians."

The flanker has the distinction of being the first black captain of the Springboks, a significant appointment in post-apartheid South Africa.

Kolisi, however, said: "I'm just happy to be the captain. Being the first black captain isn't something that comes to mind, I'm just really happy for the huge privilege that it is, and for anybody who comes from my community or any community.

"I just want to represent all of the people there. Just being the Springboks captain is a huge privilege."

South Africa could face Japan in the quarter-finals in a repeat of the 'Miracle of Brighton' when the Brave Blossoms stunned the Springboks 34-32 in the greatest World Cup upset of them all four years ago.

Japan are currently unbeaten at this edition having produced another shock win with a 19-12 success over Ireland, and Springboks assistant coach Mzwandile Stick said: "At the moment, the focus is just on the game we are playing.

"We know that we might face either Ireland, Japan or Scotland (in the quarter-finals).

"But it's good to see a country like Japan managing to (do well), especially as the host nation."

Stick added: "We may call them 'smaller nations', but when it comes to the World Cup, they are showing that if you don't pitch up on the day, you are going to be hurt."