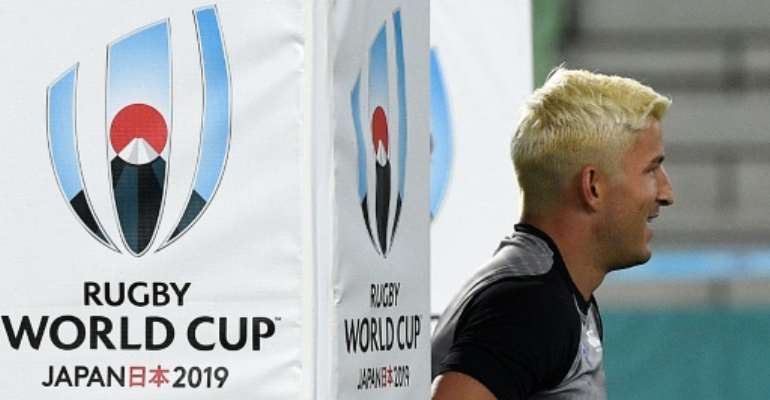 Canada's wing DTH Van Der Merwe is fired up ahead of the match against South Africa. By Filippo MONTEFORTE (AFP)

When Canada star DTH van der Merwe glances at the strapping on his left wrist during the World Cup match against his native South Africa on Tuesday, he will again be inspired by the words 'Captain Greene'.

Trevor Greene was almost killed by a 16-year-old boy who took an axe to his head as he and other Canadian soldiers talked to village elders in Afghanistan in 2006.

"As far as Captain Greene goes, we had him speaking to us before the 2011 World Cup," van der Merwe told reporters at the Kobe Misaki Stadium on Monday.

"He's a Canadian rugby player who obviously went to Afghanistan and had the tragic injury.

"So just some of the words he said prior to that World Cup, just the things that he had to go through, the struggles in life, is just something that kind of hit home and we decided that we'll name our mascot 'Captain Greene'.

"I wear my wife and three kids on (the strapping) my right hand and Captain Greene on the left, so when I need a bit of inspiration I just look down at that."

Van der Merwe will be making a Canada record 15th World Cup appearance on Tuesday and could become only the fifth player to have scored a try in four different World Cups if he scores against either South Africa or Namibia.

The 33-year-old wing, who grew up in Worcester, a hour's drive north of Cape Town, emigrated with his family when he was a teenager.

But the much-travelled van der Merwe, who has played club rugby in England, Wales and Scotland, still has relatives in South Africa and visited family there as recently as February.

Van der Merwe added that while playing a match at Newlands in Cape Town had been "one of my bucket list things", facing South Africa would be a good substitute.

Canada, still winless at this World Cup, head into Tuesday's match with just a six-day turnaround from their 63-0 thrashing by reigning champions New Zealand.

But coach Kingsley Jones, a former Wales back-row, said: "I walked into a party this morning in the changing room -- beatbox going, guys smiling.

"For me, that's a massive confidence booster," added Jones, the last of whose 10 Wales caps came when he captained a side thrashed 96-13 by South Africa at Pretoria in 1998.

Meanwhile Canada captain Tyler Ardron, who plays for the Waikato Chiefs in New Zealand, said they were glad to "measure" themselves against the All Blacks and the Springboks, traditionally the two strongest sides in international rugby union.

"It's a different level even from Super Rugby," he said.

"I play against the same guys every week, but when you put the 15 best of them on the field at the same time, that pace and physicality is impressive."