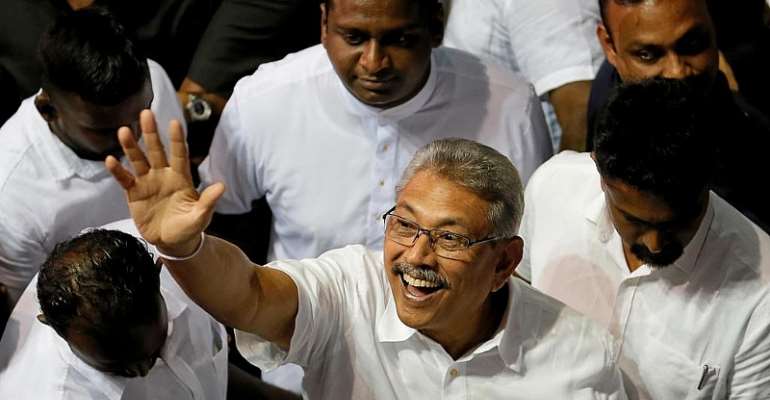 A record 35 candidates filed nominations on Monday to run for president of Sri Lanka in next month's election. Incumbent Maithripala Sirisena opted not to seek another term, making former defence secretary Gotabaya Rajapakse the favourite.

During the Election Commission's two-hour period for nominations, 41 aspirants paid deposits, but six have already pulled out of the race.

The 35 remaining candidates breaks the previous record of 22 candidates running for the Indian Ocean island nation's presidency in 2010.

They include two Buddhist monks, four people from the country's Muslim minority and two from the Tamil community. There is only one woman candidate.

Sirisena did not submit a candidacy by the Sunday deadline, thus becoming ineligible to file a nomination. A spokesperson from the Sri Lanka Freedom Party (SLFP) confirmed the incumbent was not seeking re-election.

The Supreme Court ruled against the action and reinstated Wickremesinghe.

The incumbent would have likely had trouble beating Rajapakse, who served as defence secretary under his brother and who is popular for his part in ending Sri Lanka's 26-year-long civil war in 2009.

He heads a breakaway party and he has the loyalty of a majority from the SLFP, but also faces several court cases over corruption allegations and the validity of his Sri Lankan citizenship.

He says he has renounced the US citizenship he obtained in 2003, but with doubts lingering, the influential Rajapake family has also submitted a nomination for elder brother Chamal, a former speaker of parliament.

Rajapakse's main rival is Sajith Premadasa of the governing coalition. He is a son of former President Ranasinghe Premadasa, who was assassinated by the Tamil Tiger rebels in 1993.