NPP Has Failed Ghanaians Beyond An Apology – Alex Mould 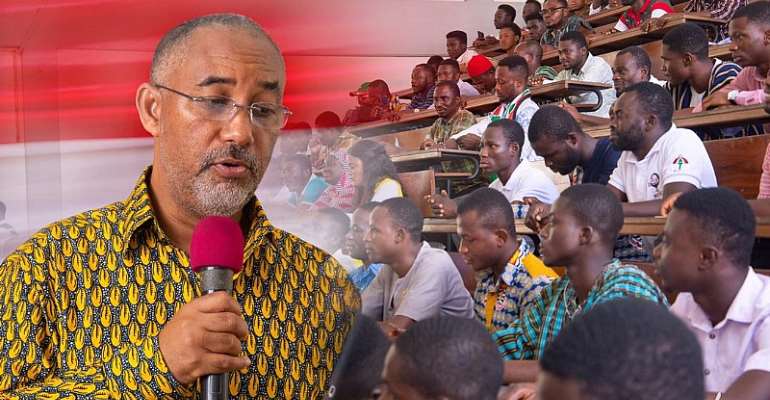 A former statesman has taken on the New Patriotic Party (NPP) and President Nana Akuffo Addo led government on their failed promises to the Ghanaians after they made huge unrealistic promises to deceive Ghanaians for power in run up to the 2016 elections.

“We all heard, 1 District 1 Factory, 1 Village 1 Dam, US$1 million per constituency per a year, Free SHS, reduction of cost of electricity etc”, Alex Mould, former boss of Ghana National Petroleum Corporation (GNPC) reechoed when addressing a section of TEIN members at University of Cape Coast (UCC) campus on Saturday.

'All these pipe dreams were to deceive Ghanaians in order to gain power. Yet, how many of them have they been able to achieve? All we see now is: 'One Week One Fraud, One Week One Scandal, One Week One Thief, One Week One Deception' according to Mr Mould.

“Ghanaians owes H.E John Dramani Mahama (former president and 2020 flagbearer of the NDC party) a depth of gratitude for reshaping the destiny of Ghana under his tenure”, the former GNPC Boss noted.

However, addressing issues on the education, he said, when you ask them to show their achievements in the past three years, they mention Free SHS.

Giving a brief history and programs and policies which led to the free SHS, he asked, “Did you know that Progressive Free SHS is enshrined in Ghana's 1992 constitution?”

So, contrary to the NPP's claims it is NOT a new policy created by them. Let me give you a history lesson on the Free SHS program. In 1995 the government introduced Free Compulsory Universal Basic Education (FCUBE) for a 10 year period, which ended in 2005. In the year 2000 government adopted the Millennium Development Goals (MDG) which ended in 2015. The second goal of the MDG was to achieve universal primary education. Successive governments implemented many programs to achieve this goal, and by the year 2015 the gross enrolment rate at the basic education level was more than 100%.

The next step was the Universal Secondary Education or Free access.

In 2014, the John Mahama led government procured a loan of US$156 million to support the Secondary Education Improvement Programme (SEIP) to increase space at the secondary education level. Ghana was supposed to achieve Universal Secondary Education by the year 2030 under the Sustainable Development Goals (SDGs), which was launched in 2015.

John Mahama's government then launched the Progressive Free SHS and started its implementation and for that matter, the JM government in 2021 will not abolish a policy he spearheaded because we are bound under the SGD to achieve universal Secondary education and also ensure quality, he emphasized.

“My problem with Free SHS as implemented by this government is equity. One cardinal ingredient of any social intervention policy is to bridge the gap between the lowest quintiles and the highest quintiles in the society. This FSHS is rather widening the gap because the non-poor too are benefiting. So the richer is getting richer by not paying what he/she could afford to pay.

Latest Gross Income Index (that's a tool to measure income inequality) puts Ghana at 43% which in our part of the world is significantly high, the lower the percentage the better. So, targeting is very important when a government introduces such policies.

If one look at the World Bank impact assessment report in 2015, apart from Livelihood Empowerment Against Poverty (LEAP), Ghana performed below 50% in all the goals under MDG. And the only reason Ghana succeeded in LEAP was because of targeting.

“Now let's talk about the funding. Have any of you seen a document of consolidated financial framework to ensure the sustainability of the FSHS policy? How is the FSHS really being financed? It is prudent we discuss the source of revenue for the policy.

“And keep in mind the "inter-generational burden" i.e. the legacy of burden we pass on to the next generation”, he stressed.

Additionally, Mr Mould registered his displeasure at the attempt by the government to introduce the Comprehensive Sexuality Education (CSE) into our school curriculum.

“Even more scandalous than the fiasco which has become the implementation of free SHS, is the recent spotlight on the attempt by the gov't to introduce Comprehensive Sexuality Education (CSE) into our school curriculum. Is this really a priority? Granted, our educational curriculum needs to be updated to equip the next generation to compete globally with their peers.

“So I believe the focus should be on improving quality education overall to our children. Yet, in this fast-paced, technological age of Artificial Intelligence one may wonder what effort we are making to bridge the educational gap between our children and children across the globe.

“And to borrow the words of our Honorable Members in Parliament “We are deeply concerned that at a time many countries are prioritizing the teaching of Math, Science, Coding, Artificial Intelligence and Climate Change; our Government's focus is on Comprehensive Sexuality Education in the service of an evil LGBT agenda.”

Meanwhile, he noted that, the NDC party's position on the CSE as stipulated by our leader H.E. JM will be to scrap all forms of it; and revert to our good old sex education curriculum, modernized and improved in consultation with major stakeholders.