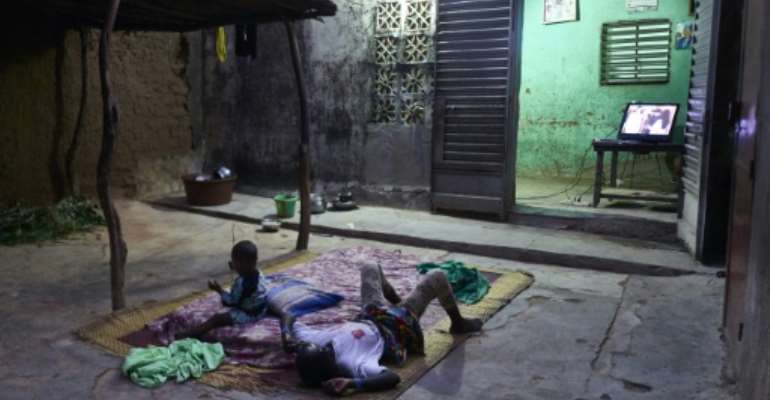 Two displaced children lie down to watch television in Segou. Authorities hope to get them into school alongside local boys and girls. By MICHELE CATTANI (AFP/File)

In a better world, nine-year-old Oumou Tomboura would have already had several years of schooling behind her and be able to write, read and count.

But in Mali, education is another casualty of conflict.

When the new academic year began last week, Oumou sat not on a classroom bench but on a mat outdoors in the southern-central town of Segou, chopping onions and tomatoes for the next meal.

Her family is among tens of thousands to have fled jihadist groups working their way southwards from the desert north to central Mali in a seven-year-old insurgency, battling the army and its allies.

"Of course I would like her to go to school, but it isn't possible," Dja said.

"When Oumou was old enough to go to school in Mamba, jihadists came and threatened the teachers and the school was closed. So she never went," Dja said wearily, bearing her youngest child on her back.

Renowned for venerable centres of learning and trade down the centuries such as Timbuktu on the southern edge of the Sahara and for a remarkable musical heritage, Mali is badly battered by the revolt.

A fresh blow came this week with the deadliest jihadist raids of the insurgency on two military camps in central Mali, where 38 soldiers were declared killed and dozens missing.

In Segou, not a single school admitted displaced children alongside the town pupils on Tuesday, when classes resumed.

The situation in Segou is overwhelming -- more than 20,000 people have taken refuge there, and Mali is a desperately poor nation.

But Abdoulaye Diallo, a member of Segou's Educational Action Committee, which oversees primary schooling in the town, said displaced families should not despair.

"The displaced should come and register with us, so we can point them to a school that will take them," he said.

Fatoumara Dja poses with her children in front of the house in Segou, where they found shelter after fleeing their village. By MICHELE CATTANI (AFP)

Dja said she was not informed of this.

The new school year will be just as hard for those who stayed behind.

One school in three has shut down in the Mopti region, which is most affected by raids from jihadists loyal to ethnic Fulani -- or Peul -- preacher Amadou Koufa. The raids prompt retaliatory violence by self-proclaimed community defence militias.

Across Mali, 920 schools are listed as closed, more than two-thirds of them in the three central regions -- Mopti, Segou and Koulikoro.

At the local education authority in Segou, regional director Itous Ag Ahmed Iknan, said he had just been informed of dramatic events in the village of Souba.

The previous week, eight jihadists had gone there, where they preached for 50 minutes.

"In their preaching, they insisted that schools be closed," he said.

"The army has to come back, so that the zone can be secured, otherwise the schools will not re-open."

If all goes well, these children attending a first day of class in Segou will later be joined by displaced youngsters in their town once resources are ready. By MICHELE CATTANI (AFP/File)

French military intervention in 2013 drove jihadist forces out of key northern towns including Timbuktu, Gao and Kidal, and Paris today lends military support to the Malian army and regional troops of the G5 Sahel force set up to counter insurgents.

Jihadist forces have steadily moved into the centre, usually adopting guerilla tactics. Violence by armed groups has also led to school closures in neighbouring Burkina Faso and Niger, according to the UN.

The Bamako government and international organisations have responded with lessons by radio, a framework of psychiatric support to help children affected by trauma or post-traumatic stress, and ad-hoc learning centres in villages and camps.

For Modibo Galy, a Malian researcher at the University of Leiden in the Netherlands, "in the eyes of the Amadou Koufa group, schools are the incarnation of Western culture, a symbol of the Westerners they are fighting."

"Teachers are civil servants who sometimes come from outside the region," Galy said. "They may become suspected of passing information to the army, of being spies."

Under this intense pressure, teachers often quit, one by one, and the school's lifeblood can drain away.