By Patrick FORT and Armel BAILY 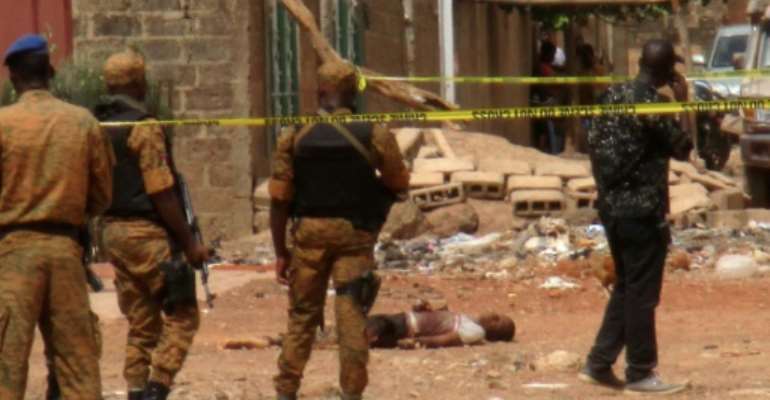 Islamist insurgents are relentlessly gaining ground, leaving the capital as one of the few areas of safe territory. By STR (AFP/File)

The expert cups his hands, with the ball-like space between them representing Ouagadougou, the capital of Burkina Faso.

He then slowly squeezes his palms together: "The vice is tightening," he says.

The movement is a distressing, yet truthful, statement of where Burkina Faso stands in its four-year-old fight against jihadism.

Islamist insurgents are relentlessly gaining ground, leaving the capital as one of the few areas of safe territory. "Safe" is a relative word.

France advises its nationals against travelling to half of Burkina's territory, including Ouagadougou. The US State Department urges American travellers to "exercise increased caution" everywhere.

Until 2015, landlocked Burkina Faso was largely spared the revolt that hit Mali and then Niger, its neighbours to the north.

But jihadists -- some linked to Al-Qaeda, others to the so-called Islamic State -- started infiltrating the north, then the east, and then endangered its southern and western borders.

Combining guerrilla hit-and-run tactics with road mines and suicide bombings, the insurgents have killed nearly 600 people, according to a toll compiled by AFP. Civil society groups put the tally at more than 1,000.

Around 300,000 people have fled their homes and almost 3,000 schools have closed. The impact on an overwhelmingly rural economy is escalating, dislocating trade and markets.

Attacks are "more widespread... more violent, bloodier, they lead to inter-community violence and the creation of self-defence militias," says Ousmane Amirou Dicko, emir of the historic Islamic kingdom of Liptako, reaching into Niger and Mali.

Even the capital came under multiple attacks on March 2, 2018. By Ahmed OUOBA (AFP/File)

"The north has been forgotten, and it's hard to recover that in the space of two or three years," adds the traditional ruler, noting a widening gap in standards with the south in the past 50 years.

A curfew has been imposed in the east, while major northern cities such as Djibo and Dori live as though in a state of siege.

"In Djibo, at 2:00 pm, everyone -- police, gendarmes, soldiers, civil servants -- heads to the military camp" where they spend the night, a policeman told AFP on condition of anonymity.

Poorly-trained and chronically short of equipment, many members of the security forces feel overwhelmed.

"We've lost the fight. Not a day goes by without something happening, even if the press doesn't know about it," said a policeman who has been made several tours of duty in the north.

Several schools have closed because of the unrest. By ISSOUF SANOGO (AFP/File)

Before protests brought about his downfall in 2014, then president Blaise Compaore kept up negotiations with Islamist forces, assuming a role of regional mediator.

"Burkina was their sanctuary," said a source in the security forces.

"At the same time, he (Compaore) feared a coup. Though he was a soldier, he pared down the army in favour of his presidential guard. In 2014, we had an army without arms."

Shaken by foiled comeback attempts by Compaore loyalists, interim authorities and then the government of President Marc Roch Christian Kabore, elected in November 2015, have done little to boost security forces.

"I have an automatic pistol. I have five rounds of ammo. Is this how we're going to fight the jihadists?" the police officer asked, adding that soldiers were no better off.

Some soldiers complain they are chronically underequipped. By Ahmed OUOBA (AFP/File)

"Normally, when we go on a mission we are entitled to 500 CFA francs (0.75 euros / $0.84) each morning, 500 at midday and 500 for the evening. In practice, we get nothing," said the policeman, who often got his water and rations from French soldiers at Djibo.

"Senior offices stay in Ouaga, the subalterns stay in big towns. There's a problem with the chain of command, discipline and involvement. The Koutougou episode sums that up," said the security source.

On August 19, the army faced the most deadly assault in its history in the northern town, where 24 soldiers were killed.

The senior-most soldier at Koutougou was a non-commissioned officer, several sources said. The unit informed their superiors that jihadists were gathering to attack, but no help came.

Last month, the Economic Community of West African States (ECOWAS) unveiled a plan to raise $1 billion (911 million euros) for the fight, but is counting on wealthy nations to fill the coffers.

France has sent 200 special forces to Ouagadougou, among 4,500 troops deployed in the Sahel nations with a mission to combat terrorism and insurgency.