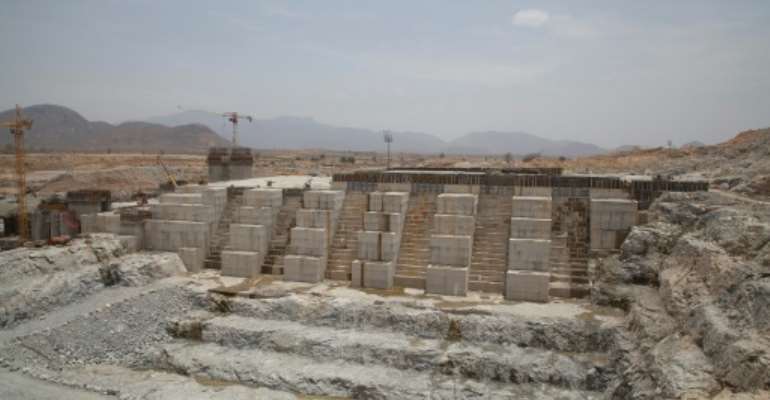 Ethiopia began constructing the Grand Renaissance Dam (pictured March 2015) in 2012, but the project turned controversial when Egypt said the dam would severely reduce its water supplies. By ZACHARIAS ABUBEKER (AFP/File)

Talks between Egypt, Ethiopia and Sudan over a controversial Nile dam hit a new "deadlock" in Khartoum on Saturday, Cairo said, blaming the Ethiopian side for the stalemate.

Ethiopia began constructing the Grand Renaissance Dam on the Blue Nile in 2012, but the project turned controversial with Egypt insisting that the gigantic dam would severely reduce its water supplies.

"The negotiations on the Renaissance dam have reached a deadlock," Egypt's irrigation ministry said in a statement after a new round of talks ended in the Sudanese capital.

It claimed the Ethiopian delegation "rejected all the proposals that take Egypt's water interests into account" and presented one that "lacked guarantees" on how to deal with droughts that may occur in the future.

Later on Saturday, the Egyptian President Abdel Fattah al-Sisi said in tweets that he followed closely the talks "which did not produce any positive results".

He also said that Egypt is "committed to defending its water rights".

Egypt depends on the Nile for about 90 percent of its needs for irrigation and drinking water, and says it has "historic rights" to the river guaranteed by treaties from 1929 and 1959.

Egypt, which sees the project as an existential threat, fears that Ethiopia's rapid construction of the dam might lead to water and food scarcity to millions of Egyptians.

The river, which runs through 10 countries, is Africa's longest and a crucial artery for water supplies and electricity for all the countries.

The Blue Nile takes its source in Ethiopia and converges with the White Nile in Khartoum to form the Nile which runs through Egypt to the Mediterranean Sea.

"The allegation that talks ended in a deadlock is completely false," Ethiopian Minister for Water and Energy, Selishi Bekele, told reporters.

"Some progress has been made.. there are some pending issues, but we believe that these pending issues can be solved before completing the construction of the dam."

Analysts fear that the three Nile basin countries could be drawn into a conflict if the dispute is not resolved before the dam begins operating.