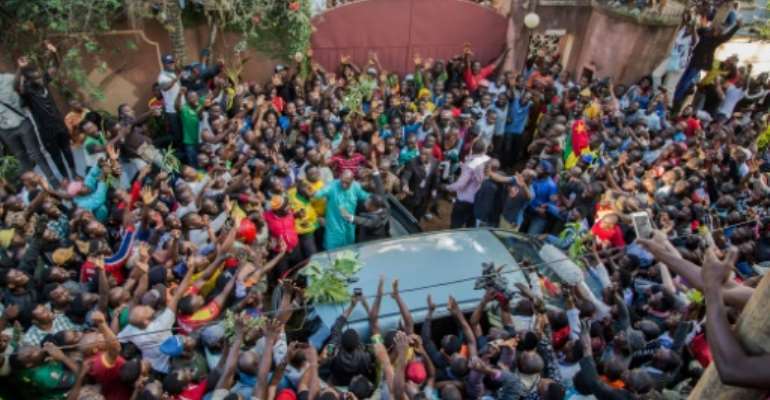 Cameroon's main opposition leader Maurice Kamto was greeted by dozens of cheering, dancing young people on his release from jail. By STRINGER (AFP)

The surprise conciliatory gesture comes as the president is facing a number of domestic crises and international criticism over political freedoms.

"We are here today thanks to your constant support," Kamto, who had spent nine months behind bars, told hundreds of supporters who gathered to greet him.

"I saw you even when you couldn't see me."

He announced a "new chapter in our struggle", adding that "if some people think that our liberation means the end of our struggle they have understood nothing".

The struggle would be "peaceful", he said before being driven away surrounded by a dozen-strong escort of klaxon-blaring vehicles.

Kamto, 65, was arrested in late January after months of peaceful opposition protests over the results of the October 2018 election.

He went on trial with dozens of others in a military court in September on charges of insurrection, hostility to the motherland and rebellion -- crimes which could be given the death penalty, though this is no longer carried out in Cameroon.

Biya, 86, has ruled Cameroon with an iron fist for nearly 37 years.

On Friday he announced he had ordered prosecutions to be dropped against "some" opposition leaders, including a number from the main Movement for the Rebirth of Cameroon (MRC) which Kamto leads.

More than 100 people in detention are also now set for release "if they have not been detained for anything else", the military court said. 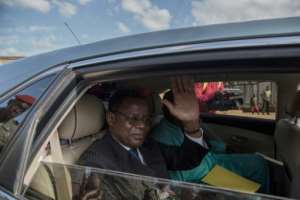 But the organisation also called on authorities to "go further by releasing all other individuals arbitrarily detained for having exercised their right to freedom of expression and peaceful assembly".

As the opposition leader arrived at his home in a residential neighbourhood of Yaounde following his release, he was met by dozens of cheering, dancing young people.

"Maurice Kamto, save us," the crowd chanted.

Most of those gathered were under 30 and -- like around 75 percent of the population -- would not have known another leader than Biya.

"We are tired of this system that has been in place for 37 years," said one protester, Abraham. "We want alternance in power. We want a new momentum for our country."

Biya's shock announcement Friday came on the closing day of crunch talks aimed at easing a bloody crisis in Cameroon's anglophone regions, which were shunned by the main separatist leaders. 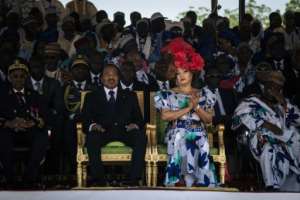 The talks also ended with a proposal to give more autonomy to the English-speaking regions, where a two-year armed campaign for independence has been met with a brutal crackdown and cost nearly 3,000 lives, according to the International Crisis Group.

In addition, Biya had Thursday announced the shelving of an investigation and the release of 333 people detained during the crisis.

The two areas in western Cameroon -- the Northwest Region and Southwest Region -- are home to most of the country's anglophones, who account for about a fifth of a population that is overwhelmingly French-speaking.

A presidential statement Saturday said that "the head of state reaffirms his determination to pursue relentlessly his efforts seeking ways and means to resolve peaceably the crises and conflicts confronting our country". 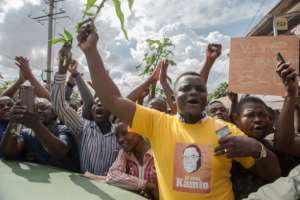 The apparent seachange in Biya's approach comes after months of intransigence and follows international pressure.

Washington indicated in March that Yaounde would do well to free Kamto -- a sentiment repeated since by the European Union and also France.

"The president is well aware that Cameroon is at a crossroads as it is dealing with important crises," Richard Makon, an expert on Cameroon politics, told AFP.

UN Secretary General Antonio Guterres said in a statement on Saturday that he "encourages the Cameroonian authorities to continue to adopt further confidence-building and reconciliation measures".