Ghana School Of Law To Expand For More Intake — CJ 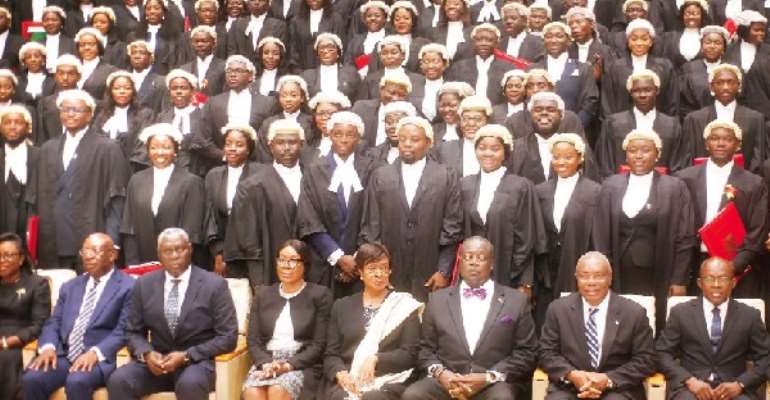 Plans are in place for further expansion of the Ghana School of Law (GSL) to increase its intake to meet the high demand for professional legal education, the Chief Justice, Justice Sophia Akuffo, has said.

Also, a new and far bigger campus would soon be constructed, she added.

The Chief Justice, however, maintained that no matter the level of expansion of the GSL, the General Legal Council (GLC) would not open the floodgates for the admission of students who did not meet the requirement.

“The position of the GLC remains that admission to the Ghana School of Law for professional legal education requires that successful candidates obtain a minimum mark of 50 per cent in an entrance examination administered by the Independent Examination Committee,” she said.

Speaking at a ceremony to enrol newly qualified lawyers into the Bar in Accra yesterday, Justice Akuffo said the GSL had already established two campuses at Legon in Accra and Kumasi, in addition to its main campus at Accra Central, to accommodate more students.

“The land for the project was acquired some years ago. Commencement of the execution of the project is expected to be captured in the 2020 budget,” she said.

Mass failures
The Chief Justice’s comment comes on the heels of some concerns raised among the public about the massive failure of students who write the entrance examination to the GSL.

Of the nearly 1,820 prospective students who wrote the examination this year, only 128 reportedly passed.

A notice at the GSL revealed that more than 90 per cent of those who wrote the examination failed to obtain the requisite marks to secure admission to the GSL.

Already, a group calling itself the Law Students Association has accused the GLC of deliberately attempting to make professional legal education the preserve of a few.

The group has declared next week a “Red week” and plans to embark on a demonstration and present a petition to President Nana Addo Dankwa Akufo-Addo.

Quality lawyers
Justice Akuffo said the GLC would not relent in its effort to maintain the highest standards in order to produce quality lawyers.

“I’m sure after what you have been through, you feel you are part of a special group, not because of exclusiveness but that you are here by merit. A profession that can assure every single member was admitted by merit is one we can all be proud of,” she told the newly qualified lawyers.

At the ceremony, Justice Akuffo led the 305 newly qualified lawyers to make an undertaking which formally unshered them into the legal profession.

The ceremony was attended by the Attorney-General, Ms Gloria Afua Akuffo; judges and family members of the newly qualified lawyers.

It was a joyous moment for the newly qualified lawyers and their family members as they were taken through the process to fully become members of the Bar.

Clad in their black gowns and wigs, they shouted and leaped for joy after the CJ had officially declared: “You are now called to the Bar, congratulations!”

Advice
The Chief Justice advised the lawyers to uphold the ethics of the legal profession and not to engage in any act that would tarnish their reputation and that of the profession.

According to her, ethical standards among lawyers, especially the young ones, had fallen sharply.

“The status of the Bar is not the best due to lack of professionalism and indiscipline as a result of the race to get rich quickly,” she said.

She reiterated the commitment of the GLC to maintain ethical standards among lawyers and said the council would not hesitate to crack the whip against any lawyer who flouted the rules and ethical standards of the profession.

Justice Akuffo further advised the lawyers not to stop learning in order to improve their knowledges and skills, adding: “Never be too proud or too shy to ask for help.”