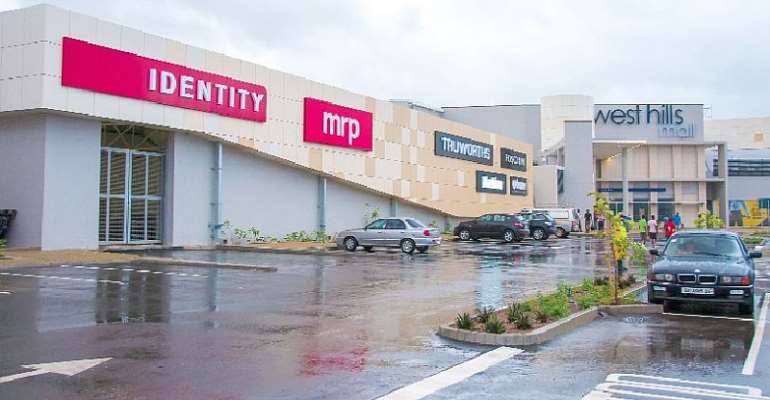 The West Hills Mall, which until recently was the toast of most shoppers in the country, is gradually losing its vibrancy due to the exit of some major foreign retailers.

Big brands such as Foschini, Woolworth and Edgars, all South Africa-based clothing lines, are exiting this month, which creates a huge vacuum in the mall that hosts several high-class brands.

The Foschini Group operates the American Swiss, Sportscene, Markham and @Home shops at the mall and its exit is seen as a sign of dwindling fortunes.

The Woolworth Group, which owns more than five shops in Ghana, including one at West Hills, recently announced that it was leaving the mall in October when its tenancy expired.

Edgars, a subsidiary of Edcon Limited and which has given job opportunities to about 1,500 people, is equally winding up this month, after nearly five years in operation.

Apart from the anchor shops and the food joints which are the centre of attraction, the cinema, which is equally a crowd puller, is gradually losing its shine, as a result of which it is currently being operated by a church on Sunday mornings.

No cause for alarm

However, Mr Jonathan Lotter, the Portfolio Assets Manager of the Broll, managers of the mall, dismissed suggestions that the fortunes of the shopping centre were dwindling.

The West Hills Mall has 57 shops in all, with two anchor shops at the east and the west wings, which has Shoprite and Game that are said to draw more traffic to the mall.

“For the West Hills Mall, the departure of the brands, as unfortunate as it may be, has offered the opportunity to introduce a new and exciting mix of local and international tenants to serve our customers,” Mr Lotter said.

“Management continues to review strategies on an ongoing basis to replace vacancies that emerge in the course of business with brands which resonate with Ghanaians and meet the demands of the local market,” he added.

Although Mr Lotter’s words may be assuring, the Daily Graphic has observed that at the Silverbird Cinema of the West Hills Mall, every Sunday morning scores of people flock to what was until very recently a basking theatre for the west end of the capital city for church activities.

They have not been watching one of the 9 a.m. to 1 p.m. movies; instead, they have been attending a mid-morning prayer session at the cinema.

During a visit to the mall, the Daily Graphic spotted the Head Pastor of the Jesus Encounters Church, Dr Fred Korankye Mensah, leading the congregation in worship at the cinema.

Mr Lotter said he was unaware that the Silverbird Cinema had been leased to ‘Jesus Encounters’, but the Daily Graphic pointed out to him that there were signposts of the church directing worshippers to the cinema.

That, he said, would be investigated because his outfit did not have records of the operations of any church in the mall.

He further dismissed reports that the $93 million mall, which is 60 per cent owned by Delico Properties Limited and 40 per cent by the Pension Fund Manager and the Social Security and National Insurance Trust (SSNIT), was recording low patronage.

A Facebook post shared by one Nana Kofi Acquah claimed that the mall was “dying” because many of the original shops had all disappeared and right now five more were clearing out their stock, ready to be taken over by churches.

“In a country where churches seem to do better than businesses, churches have already started sharing the cinema halls at the mall,” he shared on his Facebook wall.

“Gradually, they will take over the mall by collecting the GHc1, GHc5 and GH¢10 offerings of their poor congregations, the very money the big shops looked down upon when they set up at the West Hills Mall,” Nana Acquah wrote.