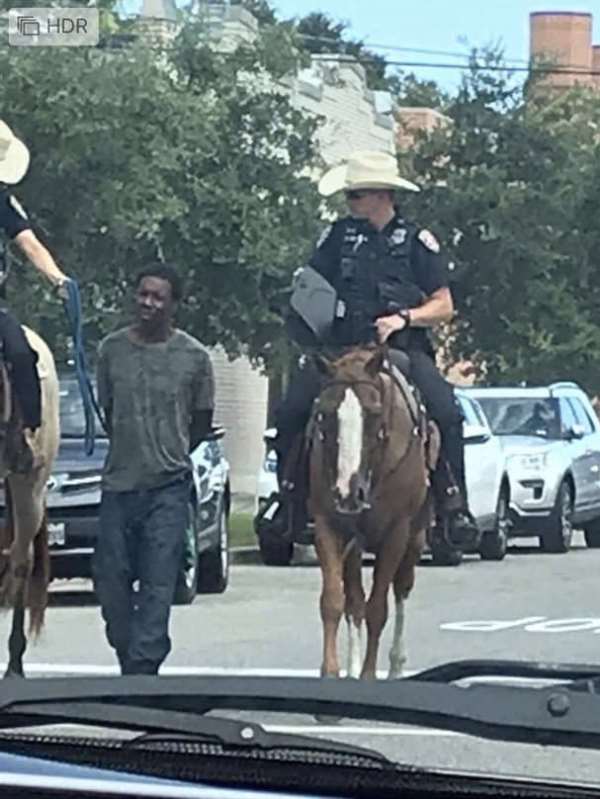 Now picture and Video of a Dashcam show exactly what happened during the scandal in Texas where the two policemen lead a leashed African American through the streets of Texas. The case had caused outrage. A now released video provides new details.

In August, an arrest in the USA triggers indignation Two policemen lead an African American off with a leash in the Texas city of Galveston. Photos circulating in the media triggered a wave of criticism. t-online.de also reported on the incident. Now further details are revealed by a Bodycam video of a police officer involved.

On the recordings one hears one of the policemen say: This will look really bad. Then the man is tied up with a rope and escorted along the street by the two riding officers. The video was released by the Galveston Police Department after the review of the controversial arrest was completed, reports U.S. broadcaster CNN.

Police chief apologized for behavior
The suspect Donald Neely had been arrested for trespassing on a property. He was supposed to be driven to the police station in a patrol car. According to police chief Vernon Hale, only mounted policemen were available at the time.

At the time, Hale apologized for the officers' actions. The two white policemen had shown "bad judgment", he said. They had inflicted "unnecessary shame" on the African American Neely. Nevertheless, the police chief stressed that the method was a "trained technique", which in certain cases was the "best course of action".

Court hearing on 24 October
According to CNN reports, city officials in August requested an investigation into the arrest by third parties. The investigation was conducted by the Texas Rangers and concluded that no criminal investigation was warranted. Another review by the district focused on police guidelines, training, and practices.

The results have not yet been published. The Galveston police chief will decide after reviewing the report whether further action is needed, CNN says.

According to the police, the suspect Neely is now on trial. A hearing is scheduled for 24 October. The defendant's lawyer stated that Neely would plead innocent.

Neely is led through streets for nine minutes

The footage from the body camera initially shows the police officers on horseback approaching the building in which Neely is staying. "Why do you keep coming back here, Mr. Neely," asks one of the officers. "You were asked by the caretaker never to return. You've been arrested here several times for a crime, and you know it." The policeman asks his partner if he should get a car to take Neely to the presidium. His colleague replied that they should not separate. The policeman asks, "Do you want him to run all the way back?" The officer affirms this.

According to the video, she takes a blue rope and wraps it around the suspect's handcuffs. Then her colleague says, "This is gonna look really bad." Later, the policeman repeats this statement. Neely says he's not embarrassed. "I'm glad you're not embarrassed, Mr. Neely," the officer replies. The man has to walk the streets of Galveston for about nine minutes until he and the policemen arrive at a police car.

Neely's lawyer already confirmed in August that her client was mentally ill and had not had a roof over her head for about seven years. At the time of the arrest, he had not taken the necessary medication.