A Private Project Tucked Onto Our Public Agenda? – Part 2 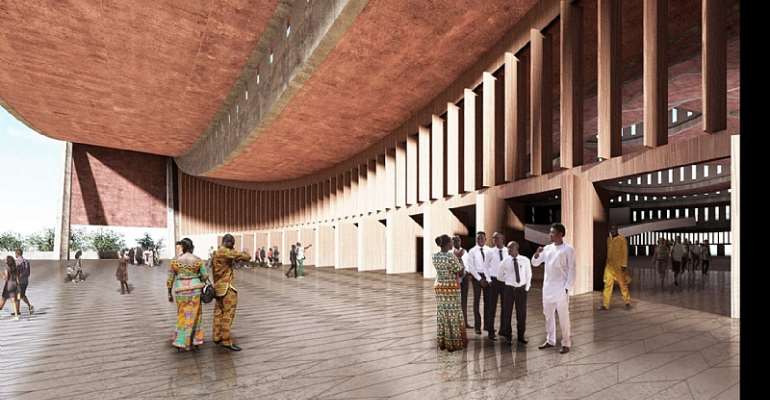 It goes without saying that it inexcusably constitutes the height of hypocrisy and absurdity for Muslim critics of the proposed National Cathedral to smugly and cavalierly presume that 17-percent of the country’s 30 million-plus people who make up the Muslim community have an inalienable right to dictate to the 71-percent-plus of the country’s population made up of Christians whether, like these virulently anti-Christian Muslim critics and their minority community, Ghana’s Christian majority has a right to construct a National Cathedral to equally cater to their religious and spiritual needs. We need to also equally significantly underscore the fact that some forthright and vocal Ghanaian Muslims have vehemently spoken out against those Jihadist-minded hypocrites among their fold, or brotherhood, who have so farcically insisted that it is only members of the country’s Muslim community who have a right to collaborate with a foreign government to construct a National Mosque but, somehow, Christian leaders like President Addo Dankwa Akufo-Addo and Mr. Kenneth Kuntunkununku Ofori-Atta, the current Finance Minister, have absolutely no right to solicit funding from overseas to facilitate the construction of the proposed multipurpose and interdenominational National Cathedral.

Ironically, Alhaji Harruna Attah also intemperately and obviously enviously accuses Nana Akufo-Addo of shipping in a foreign architect to design and oversee the construction of the National Cathedral. Well, for his information, I have done the Google Search and this is what I found about the bona fide full-blooded Ghanaian by the name of Sir David Adjaye (pronounced “Agyei” or “Adjei”) who, by the way, was born to Ghanaian parents in Dar es Salam, Tanzania, some 53 years ago. Not very long ago, the globally distinguished designer of the Washington, DC-based African-American Museum, among many other dotted around the globe, was knighted by Queen Elizabeth, II. Clearly, Alhaji Harruna Attah’s problem with Sir David Adjaye is that the latter is not a Muslim by faith. The rabidly anti-Akufo-Addo critic would also have the nation believe that the construction of the proposed National Cathedral is decidedly superfluous because the country is littered with far too many Christian Cathedrals that are run by legion proprietors of mega-churches. I suppose Mr. Harruna Attah was referring to the Bishop Duncan-Williamses and the Reverend Agyin-Asares and the Prophet Owusu-Bempahs of Ghana.

Our simple riposte here is that there existed tens of hundreds of Mosques across the country when then-President John Dramani Mahama collusively collaborated with officials of the Turkish government, on the blind side of the Christian majority populace of Ghana, to construct the National Mosque in Accra, using public funding raised in the form of taxes from Ghana’s Christian majority population. The critic of the article captioned “One Man’s Cathedral, Another Man’s Corruption” would also have his readers believe that it is morally and philosophically discriminatory for Nana Akufo-Addo to presume to construct a Christocentric National Cathedral that serves the exclusive interests of a, somehow, “illegitimate” and “Muslim-exclusive” Christian God. Once again, our simple riposte here is that in a globally recognized constitutional democracy such as doggedly pursued in Ghana’s Fourth Republic, it is the majority that carries the vote and, in effect, the constitutional mandate.

Ghana’s Christian majority, it goes without saying, is far more representative of the general aspirations, goals and values of our nation than the 17-percent Muslim minority. And so the deviously implicit suggestion that, somehow, a Christocentric God is nonrepresentative of the wishes and aspirations of the Ghanaian people is simply preposterous. Maybe in Nigeria, for example, the logic of fanatically propagandistic critics like Alhaji Harruna Attah may be invested with some validity, but definitely not here in a predominantly Christocentric Ghanaian society, or even right here in the United States where the statutory concept of the “Separation of Church and State” is far more strictly and democratically observed and legally upheld.

At any rate, his inadvisably hypocritical stance on the National Cathedral Project notwithstanding, this is arguably the most objective piece to be authored by Alhaji Harruna Attah on the administration of the man whom he greatly loves to hate more than any other major power-player on the Ghanaian geopolitical landscape. For instance, having critically and pensively recognized the Sisyphean challenge that is the anti-corruption fight, perhaps because of the protracted entrenchment of the Mills-Mahama regime in the Jubilee-Flagstaff House, the critic counsels the imperative need for the government to be studiously focused on the promotion of “innovation, creativity and productivity.” And on the latter count, as well, it goes without saying that the Akufo-Addo-led government of the New Patriotic Party (NPP) has comfortably established its primacy in this aspect of our national development agenda far more than any other previous government since the Kwame Nkrumah-led Convention People’s Party (CPP).

Clearly, what I envisage to be the singular bane of the Akufo-Addo Administration, more than even its rather lethargic approach to the battle against official corruption, is complacency. Having successfully implemented the fee-free Senior High School policy agenda, an unprecedented socioeconomic and cultural achievement in Ghana’s postcolonial history, as well as definitively bringing the Dagbon Chieftaincy Crisis to a close – an insufferable achievement in the playbook of Alhaji Harruna Atta – not to speak of the salutary sustainability of the National Health Insurance Scheme (NHIS), a critical national development establishment, and the successful legal prosecution of the Woyome Mega-Heist Scandal, the key operatives of the NPP inadvisably appear to be lax in their need to work even harder to make official corruption a veritable relic of the past. This is clearly where President Akufo-Addo needs to promptly shift into high gear, if he is to ensure that he leaves a lasting legacy that is likely to withstand the gross incompetence of the key operatives of the faux-socialist juggernaut that is the Rawlings-minted main opposition National Democratic Congress.