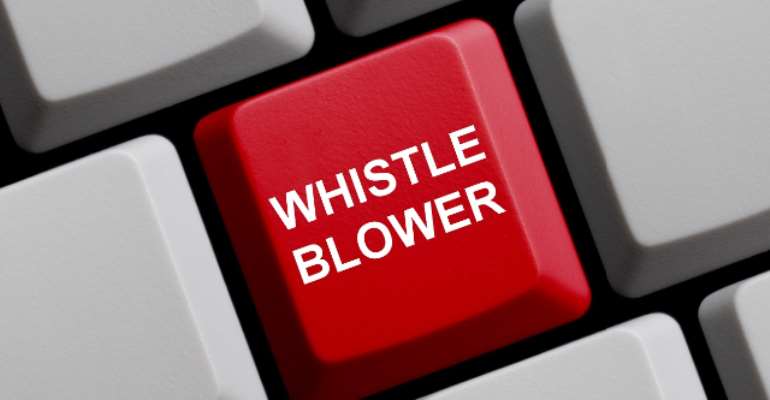 The National Commission for Civic Education (NCCE) at Ablekuma Central Municipal Office, has organized a Community durbar to educate citizens within their jurisdiction to report people engaged in corrupt practices through whistle blowing.

In an interview, the NCCE Director in Charge of Ablekuma Central Municipal Office, Madam Comfort Azalletey disclosed that, the motive behind the durbar is by using citizens to fight the canker of corruption in the country.

She therefore entreated citizens in the Municipality to be vigilant and report corrupt people in the society to appropriate authorities such as the Police, ECO, Chiefs, Assemblemen etc for action to be taken.

Madam Azalletey assured of measures in place to protect whistle blowers and also devoid of disclosing their identity to the public.

She encouraged every citizen to be proactive towards the Whistle Blowing Act so that people who engages in corruption can be exposed in communities and the country in general.

Madam Comfort Azalletey expresses disappointment on how projects funded with taxpayers money are being neglected, anytime there is a change of government without the citizen holding anybody accountable.

These projects she averred, could be of good use to a lot of people when completed and called on the citizens to report such issues to enable authorities in charge to the right thing to benefit the nation.

Madam Azalletey debunked the impression created in the minds of some people that, NCCE does not live up to expectations of Ghanaiana saying, NCCE is working 100% hard.

"We are working very well just that, we find it difficult to penetrate into the society because of logistics", she stated.

According to her, NCCE offices are across the Districts in Ghana but said, because they do not have branded vehicles their names as compared to other government institutions and Agencies, people think they are not working.

She commended Abkekuma Central Municipal Assembly and EU for their support and, urge the Member of Parliament in the area, Hon. Ebenezer Gilbert Nii Narh Nartey to assist them carry out other educational activities they are about to embark on.

Madam Comfort Azalletey further appealed to the media to also project the good works that NCCE is doing in the country.

The MP for Ablekuma Central, Hon. Ebenezer Gilbert Nii Narh Nartey pointed out that, in other to fight corruption in the country, it callsfor political well and attitudinal change.

He noted that, there are a lot of scams going on in government institutions where unscrupulous persons uses the name of institutional Heads to dup innocent people.

According to the MP, corruption should not be limited only to particular institution or agency, but rather be seen as a canker that involves everyone in the country due to our attitudes and behavior.

Ghana, he mentioned has all the laws to fight corruption but lack the implementation skills to make it work.

She urge citizen to be bold and come out to report improprieties going on in the public sectors and other institutions.