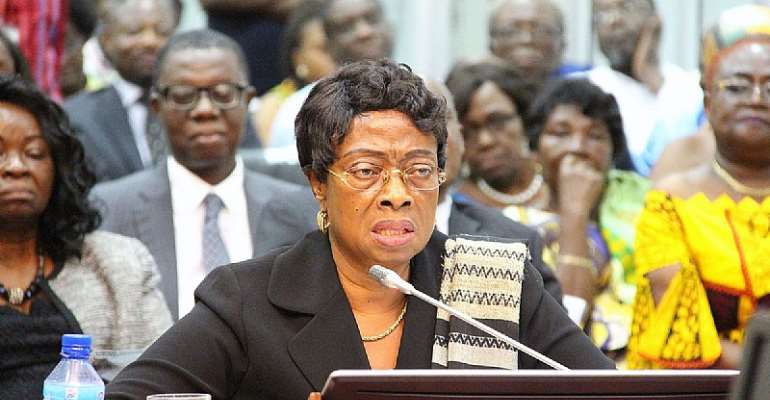 The Chief Justice (CJ) appointed by President Nana Akufo-Addo, Justice Sophia Akuffo has expressed a decision not to entertain the overwhelming demand from Ghanaians to train more lawyers to create employment as well as meet the legal representation needs of the people.

Appearing quite unhappy that more lawyers are being trained today compared to the less than forty lawyers who were practicing in the 1960s, she said so long as she remains the Chief Justice (CJ), the training of lawyers in large numbers won’t happen.

“So long as I have anything to do with it (training of lawyers), it won’t happen,” she stated.

According to the CJ who is also the Chairperson of the General Legal Council (GLC), just as the country is not doing what she called “mass production” of medical doctors and surgeons, the people should not “have mass produced lawyers imposed on them.”

This position, inconsistent as it is with the needs of today, the National Democratic Congress (NDC) disagrees with it, describing it as a strange, antiquated Akufo-Addo mentality and policy being conveyed by the CJ who is only an administrator.

What Her Ladyship Justice Sofia Akuffo seemed to miss is that inadequate infrastructure is cited as the reason for the inability to train more medical doctors as her claim is defeated by the fact that aside University of Ghana (UG), other universities including UDS, UCC, UHAS etc. are all today training medical doctors, all in an effort to meet the WHO requirement.

The news of the return of 220 Ghanaian medical doctors from Cuba to administer health care after successfully completing their training program, further exposes her claim.

Chief Justice’s claim popped up in a video at a time news have it that only 128 out of 1280 LLB candidates, making up a paltry 7% passed the 2019 GSL entrance exam.

This Paper has gathered that the next batch’s result is also ready and that only about 80 candidates out of over 700 passed and that even the case of 80 students being passed was as a result of the public uproar over the previous results.

Notwithstanding the fact that the Law profession anticipated misconduct on the part of practitioners and appropriately developed a disciplinary code to punish offenders, the CJ feels current cases of misconduct is enough reason to limit training of Lawyers.

Madam Sophia Akuffo will turn 70 in December and expected to retire but the suggestion is she will get a contract.

Information suggest about 4,000 students who have failed the Bar exams are re-sitting whereas more applicants who are denied admissions are home and continually trying.

Some Ghanaians, as a result of the continual denial of admissions spend their hard earn cash which could have been revenue for Ghana School of Law to travel elsewhere including Rwanda, Gambia, Nigeria, USA, UK etc for Law education to later return for the Post Call.

The Catalyst Newspaper sources say the Director of Ghana School of Law, Kwesi Prempeh-Eck has given the indication that Ghanaians who travel elsewhere for their law education and return home for the Post Call program won’t be taken anymore.

Meanwhile, the NDC has given its strongest yet indication, to train more lawyers to meet the nation’s critical needs of offering legal services and employment to those interested and to also complete the abandoned 12-storey Attorney General’s office [Law House] project for a better working environment for the AG and staff.

Speaking to the Catalyst Newspaper in an interview, the Member of Parliament [MP] for Tamale Central, Hon Inusah Fuseini said training more Lawyers is doable and that leadership is what is required to overcome ay challenge associated with it.

He said the resolve of the Chief Justice not to train more Lawyers is the position of President Akufo Addo and his government and that the job of the Attorney General [AG] is to offer a matter of policy which the CJ only conveyed as an Administrator.

Hon Inusah Fuseini who himself is a lawyer said the NDC will as a matter of urgency address the challenge by first calling a National Conference of the Bar and the General Legal Council to deliberate on how to ensure the quality of lawyers, the role of GLC in offering quality education, provision of facilities among others.

He said mass production is not inconsistent with quality assurance, stressing quality can always be guaranteed if one decides to work at it.

Newborns to get National Identification numbers by 2022 – Ba...
53 minutes ago