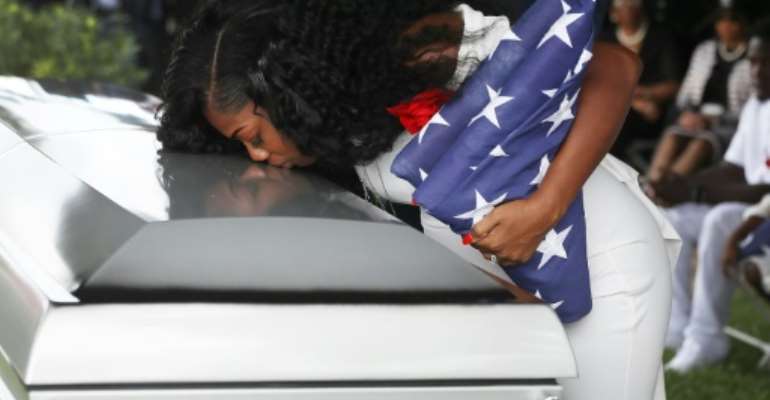 Myeshia Johnson kisses the casket of her husband US Army Sgt. LaDavid Johnson, who was killed in the October 4, 2017 ambush in Niger. By JOE RAEDLE (GETTY IMAGES/AFP/File)

The United States on Friday offered a $5 million reward for information about the leader of an Islamic State branch which claimed responsibility for an ambush in Niger two years ago that left four US servicemen dead.

Adnan Abu Walid al-Sahrawi, leader of the Islamic State in the Greater Sahara, is wanted in connection with the October 4, 2017 attack on a joint US-Nigerien patrol near the village of Tongo Tongo.

Four Nigerien troops were killed in the ambush along with four members of the US Special Forces.

The State Department's Rewards for Justice Program is offering up to $5 million for information leading to the identification or location of Abu Walid, a State Department official said.

"(Abu Walid) has a long long history of belonging to terrorist organizations including Al Qaeda," the official told AFP.

A second reward of up to $5 million is being offered for "information leading to the arrest or conviction in any country of any individual who committed, conspired to commit, or aided or abetted in the commission of the 2017 ambush in Niger."

No arrests have been made in connection with the deadly ambush so far.

"We hope to generate leads or information that would lead the US government or the Nigerien government to investigate and find the perpetrators of that attack," the official said.

The Pentagon conducted an investigation following the ambush and several officers were sanctioned in connection with the preparation of the mission.

Since the Rewards for Justice program began in 1984, more than $150 million has been paid out to over 100 people who provided "actionable information that helped bring terrorists to justice or prevented acts of international terrorism," according to the State Department.