Senior Programs Officer at the Centre for Democratic Development (CDD), Nana Kwabena Aborampeh Mensah is warning that the country's security agencies will continue to be invaded by party vigilante groups if Ghanaians do not desist from politicizing issues.

According to him, this could happen since Ghana over the years has not been consistent in dealing with issues of vigilantism.

Speaking at a roundtable panel discussion on the theme ‘Ghana’s Current Security Challenges’ in Ghana Academy of Arts and Sciences, Nana Aborampeh Mensah said “During the 2012 general election, we monitored Government related conflicts and observed that violent cases were recorded but out of the lots, almost 98% of cases did not see the court or have any actions taken against them”.

He added that there are several vigilantism and gangsterism since the state security lacks the preparedness to deal with the menace.

The Senior Programs Officer hinted that although issues of gangsterism seem not to be in existence in Ghana, certain traits emerging predicts a possible surfacing in future if not dealt with.

In Ghana, the use of ‘machomen’ by politicians has become an emerging phenomenon in political and electoral system.

These ‘machomen’ who act as body guards of political leaders, are used to intimidate voters especially in areas considered to be strongholds of opposing parties and are also used to disrupt the electoral process where one sense defeat.

“Lapses in the justice delivery system, the seeming breakdown of law and order and the perceived bias is the cause of where we are today,” he mentioned.

He also added that the seeming lack of control of the media landscape is a contributing factor to vigilantism in the country.

Nana Kwabena Aborampeh Mensah called for an act which will deal with issues of vigilantism and the possibly emergence of gangsterism in Ghana.

Speaking on the terrorism in the world, Brigadier General (Dr) Emmanuel Kotia revealed that the world has experienced various levels of terror threats since the end of the cold war.

He said “The state of civil conflicts has characterized the world in recent times and this has resulted in an alarming high risk of poverty, death and disease that are prevalent across the world”.

Speaking on Small Arms Proliferation in Ghana and how to tackle it, a Research Fellow at the Kofi Anna International Peacekeeping Training Centre (KAIPTC), Dr. Festus Aubyn mentioned that small arms are used in Ghana for violence such as Chieftaincy Dispute, Armed Robbery, Election Violence among other crimes.

“Currently, we don’t have the statistics of how many small arms in the country but what we rely on is the 2014 base-line survey which revealed that 2.3 million small arms and light weapons are in the possession of citizen,” he noted.

He revealed that the Ghana Commission on Small Arms lacks the needed logistics to implement its mandates across all regions. 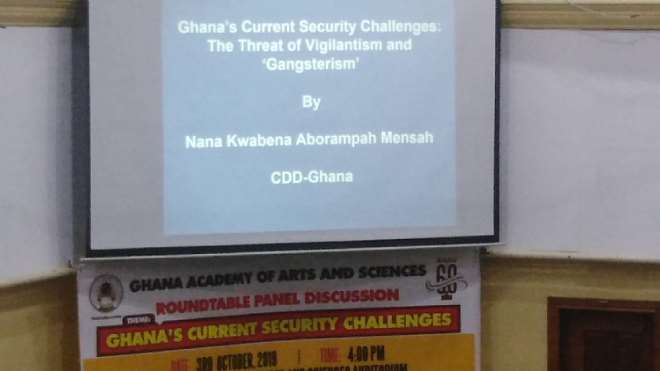 Cargo With Foodstuff Grounded At Techiman Market Over Covid-...
10 hours ago