Can France’s minorities learn from US slavery struggle? 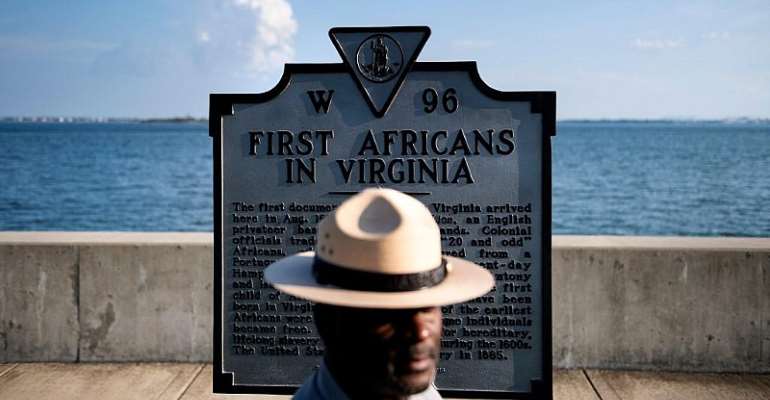 In August, America marked 400 years since the arrival of the first Africans in 1619, which started the institution of slavery. In France, observers are questioning whether there are lessons to be learned for France's African community.

In a brightly lit room of the American library in Paris, members of the public pour in for a conference exploring the 400th anniversary of the arrival of the first Africans to the British colony of Virginia. The guest speaker, a civil rights expert and playwright, is yet to arrive.

When she does, Gloria J. Browne-Marshall, apologises profusely, blaming her lateness on her taxi driver who got lost and then wanted to overcharge her.

Her humour dispels the mood of the topic she's come to discuss. But from the get go, she insists upon celebration and not defeat.

“I want to thank my ancestors. Without their perseverance, I wouldn't be here,” she tells the audience.

Ongoing struggle
In August of 1619, some 20 indentured Africans arrived in the colony of Jamestown, Virginia, after being kidnapped from their villages in present-day Angola.

“They arrive and they learn the economy, the language, culture, and they actually progress, and then once the law takes effect and they're enslaved, from there we have this fight, this ongoing fight for 400 years, so there's a lot to commemorate.”

Browne-Marshall, a professor of constitutional law at John Jay College of Criminal Justice in New York, had just returned from a trip to Angola.

“I went back to Angola. I wanted to know more about these first Africans, and I discovered Queen Nzinga. Not only did she rule but she went to battle and stood up to Portuguese slave traders,” she comments.

Choose to fight
By highlighting the brave achievements of the Angolan warrior queen and others like her, Browne-Marshall attempts to reclaim some of the dignity lost during the slavery era, which she has documented on extensively.

“We all have choices. Are we going to go on with the programme even if it is oppressive to others, or are we going to stand our ground and fight? Queen Nzinga did, and that really inspired me.”

Her research has also focused on recent battles for equal rights, including that of Mum Bett, the first enslaved African American to file and win a freedom suit in Massachusetts.

“Just as Mum Bett became Elizabeth Freeman by pushing against those that would oppress her, we have to continue pushing forward. We can't sit down and believe that the battle is over.”

Same battle
Yet the battle may be more difficult depending on what side of the Atlantic you're on.

“I've been in the same company for over twenty years and have never been promoted,” a female engineer from Martinique tells the audience.

“I think the US has enabled black people to have more opportunities than here in France,” she says.

To which Browne-Marshall replies “Are you demanding the freedom and that you be treated fairly?” echoing the words of former slave and abolitionist Frederick Douglass.

Another female member points out differences between slavery in the United States and France.

If the enslavement of Africans began in 1619 in the US, it would not begin in France until 1642. Moreover, it would eventually be abolished here in 1848, after initially being reinstated in 1802, while America would follow suit in 1865.

Identity conundrum
Such identity politics hit a raw nerve in France where the notion of "Frenchness" is associated with a common set of values as opposed to colour or origin.

Furthermore, critics point out that flagging up the differences between communities runs the risk of forging a common identity between them at the expense of a national identity, and thereby legitimising racial divisions that activists want to abolish.

“The French, of all people are the ones everyone knows will stand up for their culture. So, why can't people in the African diaspora stand up and say I am proud of my heritage as an African in this country, and I'm French?”

The issue of French identity came to the fore during last year's World Cup, where some commentators joked that the tournament had been won by an African team, due to the fact that 19 of its 23 players were of African descent.

Civil rights in France
The debate is a complex one, but for Browne-Marshall it should not distract from the legacy of slavery, which still lingers in enduring inequities in opportunity for the children of migrants or whose family generation emigrated to France.

"I think that France needs to have a civil rights movement,” she reckons, referring to the decades-long struggle for equal rights for African-Americans led by figures such as Martin Luther King.

“Fighting for your freedom and not waiting for it to be handed down to you, is something so powerful for the spirit and so necessary,” she said.

This is the third part of RFI's series on France's diasporas. Subscribe on iTunes or Google podcasts.

To listen to this episode, hit the Play button above

Trade Minister’s promise to open Komenda Sugar factory ‘a me...
34 minutes ago