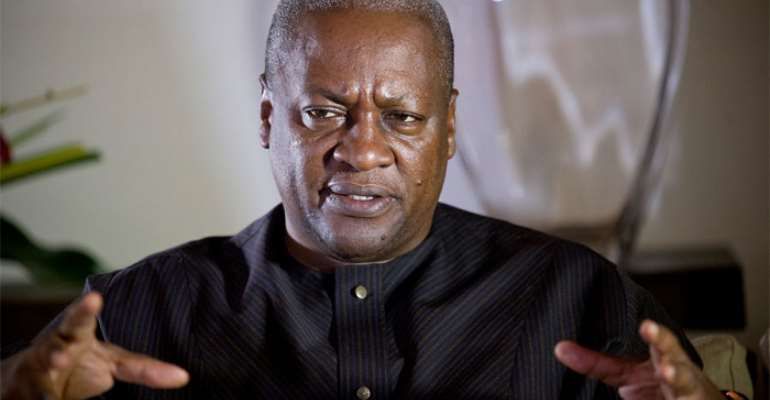 The flagbearer of the NDC is expected to name his running mate for the 2020 general elections any day now. This list for the potential running mate is long with people speculating possible candidates including Kwesi Ahwoi, Oppong Fosu, and any of the candidates who contested John Mahama in the NDC presidential primaries.

The NDC is floating these trial balloons or putting names out there to see what kind of positive or negative reactions they get and that may help the party decide just whom they are going to choose as John Mahama’s running mate.

These ideas may well have been part of the strategy of the NDC to date, but based on the assumption that Nana Akuffo Addo will still maintain Dr. Bawumia as his running mate in the 2020 elections, the NDC must choose a more run of the-mill running mate, someone that will appeal to the Southern (Akan, Ewe, Ga/Adangbe) and floating voters.

There is no doubt that JM’s running mate must come from Southern Ghana and the candidate should be someone who is above reproach and has no ugly skeletons that will fall out of the closet when some enterprising reporter starts digging around.

There were many that speculated that John Mahama might select an Akan/Ashanti in order to shore up votes from the Ashanti region where the performance of the NDC in elections has been abysmal. Others are of the view that the NDC must look for a running mate from the either the Ga/Adagbe or the Volta region. And choosing a candidate from the North should not be part of the search since John is from the North.

Those who argue that the running mate must be Akan/Ashanti think that that combination will shore up NDC votes in the Ashanti Region. Let us recall that the wife of the founder and leader of the NDC, JJ Rawlings, is an Ashanti and that did not translate into votes for the NDC in the Ashanti region. The numerous development projects initiated by Professor Mills and John Mahama in the Ashanti region never reflected into votes for the NDC in the previous elections. It is competence that is required and not the false ethnic mathematics.

The Fantis have had their turn in the leadership of the NDC and some Ashanti NDC supporters argue that the Akans in NDC are not only Fantis.

Choosing from those who contested JM
Knowing who JM is, he may not consider selecting a running mate from the six persons (Alban Bagbin, Nurudeen Idrissu, Goosie Tanoh, Ekwow Spio-Garbrah, Sylvester Mensah and Joshua Alabi) who contested him in the NDC primaries. His reason? They challenged him and he may try justifying the decision not to choose any of the for the following reasons.

Since the running mate must be from the South, Alban Bagbin and Nurudeen Idrissu who are northerners are out. Though Hon. Bagbin is a gentleman and an astute parliamentarian and the only candidate who won in his constituency against JM in the primaries, he will not be the ideal candidate to partner JM.

Goosie Tanoh is a fine gentleman, brilliant and eloquent person from the central region. He is appealing to the cadre front and the youth. But many voters think that the Fantis have had their turn on several occasions in the NDC.

Neither of the two candidates from Ga/Adangbe (Sylvester Mensah and Joshua Alabi) have not shown keen interest in becoming a running mate. Knowing Sly Mensah from a distance, he is not a team player and always wants to be a boss and anytime and anywhere and will therefore undermine any person he is supposed to work under.

The abysmal performance of the NPP can propel the NDC back to power but the selection of a running mate is one of the first looks at how JM will govern. The choice of a presidential running mate illuminates those characteristics that are important in a partner to the presidential candidate, and the structure and process used to make the selection is a glimpse into the candidate's management style. The electorate is waiting and expecting a team that they can have confidence in.