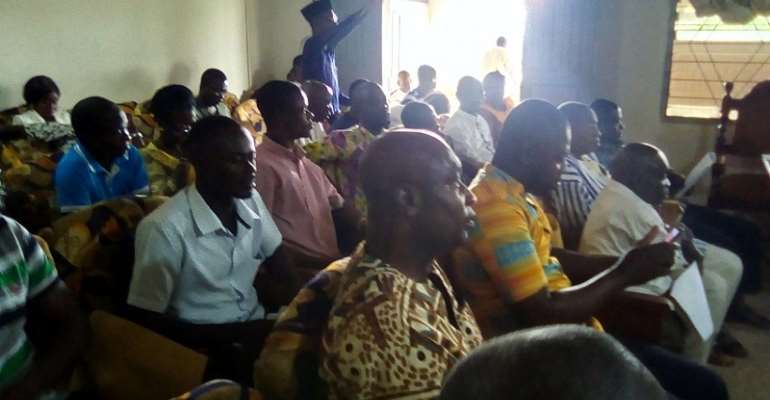 The Member of Parliament of Dormaa East Constituency, Hon. Williams Kwesi Sabi who doubles as the Deputy Minister of Monitoring and Evaluation as well as the District Chief Executive, Hon. Emmanuel Kofi Agyeman have both commended Assembly Members of the Dormaa East District Assembly in the Bono Region for work well done during their tenure of office.

The commendations came respectively when both took turns to address the Assembly at the Third Ordinary General Assembly Meeting held at the Assembly Hall, Wamfie on Monday September, 30 2019.

The meeting which is the last ahead of Assemblies' dissolution on October 7, 2019 as has been directed by government was to enable members discuss and approve changes made in the 2020 composite budget estimate and annual action plan to guard the activity of the District Assembly while Assembly sittings come to a halt. It also offered members the opportunity to exchange pleasantries and bid farewell.

Some of the changes made in the budget which were approved by the assembly included using GH₵150,000.00 instead of GH₵70.000.00 for extension of electricity and street lights repairs, while GH₵150, 000.00 instead of GH₵80,000.00 go for reshaping of 50km road in the district and 20% of IGF capital project for financing the completion of self-help market projects at Begyewe, Wamanafo instead of renovating a 2 number market shed at Wamanfo.

Some other changes in the annual action plan included to undertake capacity building programme in all area councils instead of the proposed two area councils, while the amount for the development of the planning schemes for five area councils be increased from GH₵50, 000.00 to GH₵100, 000.00 and a tree planting exercise which was to take place in just two schools be extended to cover all schools in the district.

On his part, the DCE acknowledged the good work done by assembly members both elected and appointed which has translation into getting the district an assembly bye laws and numerous infrastructural projects and developments and expressed the desire of honouring them with certificates alongside other tokens of appreciation.

He expressed appreciation for their tireless efforts reiterating that how far the district has come is a reflection of their dedicated hard work and passion as well as their contributions to deliberations and discussions on the floor of the house and this serves as the bedrock for more achievements to come.

He was very hopeful of a Municipal status soon.
He also commended the various subcommittees and Executive committee for their team work the cooperation in their common vision which he said is much to be desired.

He expressed gratefulness on behalf of the President Nana Addo and the entire district, wishing the assembly members God’s blessings in their endeavors, he said he look forward to working together with those who would come back.

Hon Agyeman ceased the opportunity to acknowledge the hard work of technocrats at the Assembly too. He expained their sacrifices has enabled the district assembly performed excellently in all the FOAT assessments.

The MP, Hon Sabi appreciated the Assembly Members with a hundred Ghana cedis as a token for their voluntary work.

He commended them for the selfless enthusiastic service and hope those who would be reelected would bring experience to bear on the new ones for the sustenance of good governance.

The District Director of Education, Rev Joseph Amoa called on parents to support other stakeholders the education of their wards.

He stated government and teachers as well as others are doing their best at all levels and parents should endeavor not to leave all the responsibility on them but give all that their wards need to sustain the free education policy.

Newborns to get National Identification numbers by 2022 – Ba...
50 minutes ago