Was Mahama This Progressive? Come On, KYA! 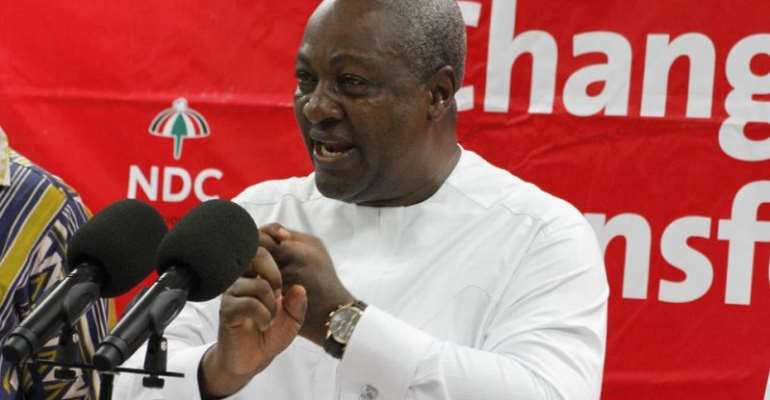 The court-ordered blocking of the entrance to the Manhyia Palace of His Royal Majesty, The Asantehene, Otumfuo Osei-Tutu, II, by the Kumasi Riot Police, in a bid to preventing the leadership of the Kumasi Youth Association (KYA) from presenting a list of grievances to the Supreme Overlord of the globally renowned Asante Federation, was perfectly the proper thing to do, if also because the move by the KYA leaders was obviously mischievously calculated to inadvisably force The Asantehene to assume the patently inglorious status of a mainstream run-of-the-mill politician, a role that Ghana’s most influential monarch has consistently insisted that his status and position expressly precludes him from partaking of (See “Riot Police Take Over Manhyia Palace” MyNewsGh.com / Ghanaweb.com 9/28/19).

The reality, however, tells a different story altogether. Not very long ago, for example, The Asantehene either accompanied or joined the late President John Evans Atta-Mills – it very well could have been former President John Dramani Mahama – to the township of Asante-Bekwai to either commission or cut sod for the construction of some real-estate project. At the time, when Otumfuo Osei-Tutu was severely criticized for deigning to rather inadvisably dabble in partisan politics, The Asantehene promptly and sharply shot back at his critics by assertively insisting that as one who had been legitimately enstooled by the representatives of the Asante Federation or the Asanteman Council, I forget which, he had a bounden obligation to ensure that the people who had made him their Paramount King received their fair of the proverbial national cake.

Thus, it well appears that the actions of his recent-past public pronouncements have come back to haunt Otumfuo Osei-Tutu with a vengeance. We are also informed, by the way, that the overriding mission of the leaders of the Kumasi Youth Association entailed the demand for His Majesty to prevail on His Excellency, President Addo Dankwa Akufo-Addo, to ensure the speedy completion of all development projects initiated by the previous Mahama-led government of the National Democratic Congress. The group had originally intended to mount a massive demonstration on the foregrounds of Manhyia Palace but was promptly prevented from doing so by an indefinite court injunction.

We personally find this action on the part of the KYA executives to be rather bizarre because it implicitly presupposes that former President Mahama was fully on course to remarkably reducing the dire socioeconomic straits of the people and inhabitants of the Kumasi Metropolitan Area, in particular, and the Asante Region, in general, in ways that could scarcely be said of the Akufo-Addo-led government of the New Patriotic Party (NPP). This is rather bizarre because the stark and seismic outcome of the 2016 general election gives absolutely no remarkable indication that the then President John Dramani Mahama had acquitted himself creditably insofar as the level of development and employment opportunities – Dumsor and all – for the people of Ghana’s most populous region was concerned.

In short, what we are unmistakably saying here is that the move by the leadership of the Kumasi Youth Association may very well have been motivated by a desperately cynical and megalomaniacal or power-hungry leadership of the National Democratic Congress. If, indeed, the KYA leadership were that really serious about their alleged petition for the prompt completion of projects initiated by the previous Mahama regime, they could even more appropriately and more constructively directed their petition to the Asante Regional Minister, who is unarguably the most logical and/or significant representative of Nana Akufo-Addo, and not His Majesty, Otumfuo Osei-Tutu, II, whom the country’s 1992 Republican Constitution places well above – actually well outside of – partisan politics.

Then also, what makes the KYA petition even more spurious, as well as suspicious, is the fact that it comes on the heels of a scandalous attempt by former President Mahama and his election-time show-horse of a Chief-of-Staff, to wit, Mr. Julius Debrah, to globally impugn the image, reputation and credibility of His Majesty, especially vis-à-vis the latter’s recent assertion at the United Nations’ Headquarters in New York, just this past September, that it was he, Otumfuo Osei-Tutu, II, who had personally and privately prevailed on an electorally trounced incumbent President Mahama to wisely and gracefully conceded defeat to then-Candidate Addo Dankwa Akufo-Addo. In a letter to the Ghanaian media and the global community that whipped up an unprecedented nationwide controversy, Messrs. Mahama and Debrah vehemently and virulently contested The Asantehene’s version of what actually transpired in the wake of the seismic 2016 defeat in the polls of Mr. Mahama by the now-President Akufo-Addo. We think we smell some stinky “cat-fish” here.

The author has 5391 publications published on Modern Ghana.