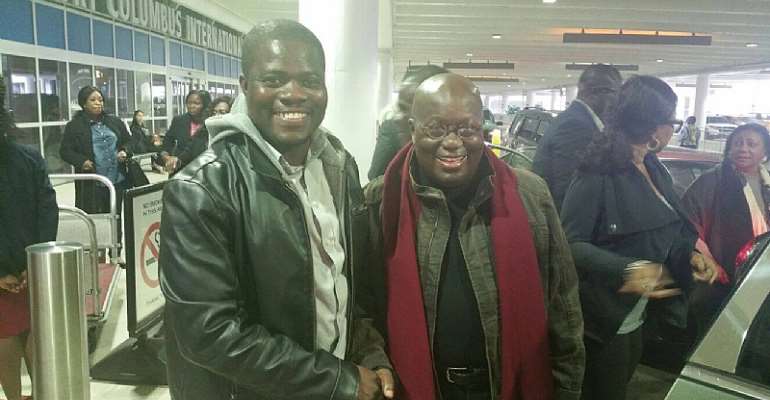 His decision came after he was refused entry to the event in New Jersey, USA where President Akufo Addo recently delivered a speech.

Solomon, the mining engineer and a staunch NPP member began to criticize his own party since June 2018, after he coordinated representatives of Ghanaian diaspora mining professionals team to Ghana in an attempt to conduct investigations into the real problems associated with artisanal and small-scale mining activities in Ghana.

His team was invited by the then Minister for Lands and Natural Resources, Hon. John Peter Amewu, after presenting a strategic plan that would assist the ministry to address the illegal mining, popularly known as “galamsey” issues at no cost to the government.

According to the mining technical person, the small-scale operations in Ghana can be properly managed to create lucrative employment for the Ghanaian citizens in the rural areas so that the rural-urban migration can be minimized.

Again, the revenue and taxes generated from regularized small-scale mining can help boost the local economies as practiced in the western world.

Furthermore, the engineer thought that formalized small-scale mining are operated in USA, Canada, Colombia, Peru, etc, without water pollution so Ghanaians can replicate same in Ghana.

Solomon cannot fathom why the government should allow the Chinese foreigners to mine illegally in Ghana while the Ghanaian citizens with valid mining licences stay home unemployed. This is the reason why the freedom fighter, Owusu, took excuse duty from his job in USA and decided to spend three (3) months in Ghana to tour the various artisanal and small-scale mining sites to identify the actual causes of the environmental problems associated with the smaller mining operations.

Surprisingly, the mining team encountered serious opposition and frustration from the Inter-Ministerial Committee of Illegal Mining (IMCIM) in Ghana, after Solomon spent time and resources to travel to Ghana and stayed for three (3) months. After conducting quick fieldworks in the Eastern and Western Regions, he realized that the Chinese nationals were still operating illegal mining under the protection of armed security men in the midst of the mining ban, leading to the various pollutions of the nation’s water bodies in the mining areas. The no-nonsense NPP party member began channelling his grievances through the party hierarchy but his complains weren’t addressed.

In April this year, the diehard NPP member attended a town hall meeting at the Ghana Embassy in Washington DC and asked a question about the reason behind the nolle prosequi issued by the Attorney General to discontinue the court case against the Chinese illegal miner, Aisha Huang. Responding to the question, the Senior Minister, Mr. Yaw Osafo Marfo gave an answer which dissatisfied Solomon and many Ghanaians.

On Friday, September 20, 2019, Solomon travelled again to New Jersey and demanded a convincing answer from the President, Nana Akufo Addo on the same question concerning the release of the Chinese illegal miner. The President of the Republic of Ghana conceded that it was a mistake on the part of the government to allow the Chinese lady to escape prosecution after degrading Ghana’s lands and polluting water bodies.

The concerned Ghanaian had ten (10) questions to ask the President and therefore attended the next event at the Rutgers University, New Jersey on Saturday September 21, 2019 to ask questions on the Menzgold saga and some corruption scandals under the watch of the President. In addition, he went to the event premises to produce documents and videos as evidence of corrupt practices in the small-scale mining sector in Ghana.

Knowing that the mining engineer would ask tedious questions, which the President might find it difficult to answer, some officials from the presidency were ordered by President Akufo Addo to prevent Solomon from entering the event so that he could not ask his questions. After this incident, the staunch NPP member in USA realized that the leader of the party and the nation was not ready to crack the whip and punish his corrupt appointees.

In his resignation letter, Solomon Owusu stated that his decision to exit the party was to enable him to criticize the NPP government to ensure display of justice, transparency and accountability as enshrined in Ghana’s constitution. He has called on all Ghanaians to put the government on its toes to save the future of the youth and the unborn generations.