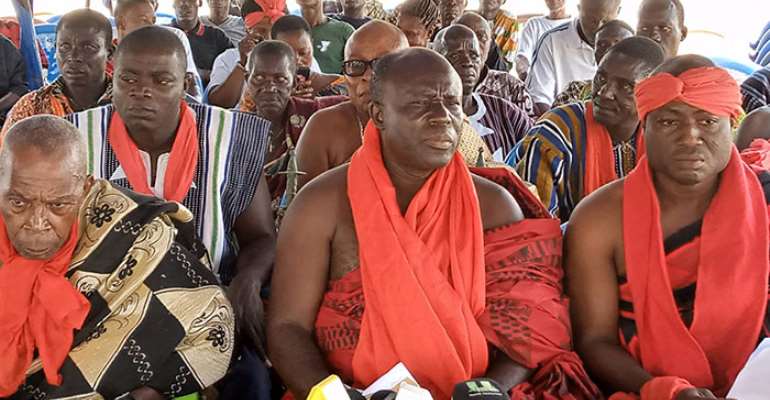 The chiefs of Upper and Lower Axim traditional areas in the Western Region have highly commended President Akufo-Addo for ensuring Axim had its fair share of the national cake which had eluded residents of the area for years.

Besides, they mentioned the fixing of pavement blocks at Victoria Park in front of Fort St. Anthonio by the current government, and a host of unprecedented ongoing developmental projects in the ancient fishing town.

The chiefs have, therefore, pledged their support to the Akufo-Addo government since, according to them, it is ensuring that Axim becomes one of the most developed towns in the country.

At a joint news conference at Axim on Wednesday, the Paramount Chief of Lower Axim Traditional Area, Awulae Attibrukusu III, appealed to the government to ignore calls from the chief of Nsein, near Axim, to halt the construction of the fishing harbour because the area where the project was taking place belonged to his traditional area.

According to Awulae Attibrukusu, the Chief of Nsein, Awulae Agyefi Kwame, speaking at a Kundum festival in his area recently, 'falsely' claimed among other things that the land on which the harbour project was being constructed, as well as the Fort St. Anthonio, was part of his area.

However, the Lower Axim paramount chief said on Wednesday that “we the chiefs and people of Axim find the comments by the Nsein chief distasteful and unfortunate. One would have expected that if Nana Nsein harboured any grievances he would have ventilated them at the appropriate quarters, the courts.”

He pointed out that the land on which the Fort stood as well as the adjoining Victoria Park belonged to the Majoley family of Upper Axim and that there were documents to support it. He asked the Nsein chiefs to go to court if they were indeed the owners of the land.

He described all the ongoing projects in the Axim area as viable economic projects that would be beneficial to Axim and all surrounding towns including Nsein.

He said “our primary duty as chiefs should be the welfare of our people, and how to bring social and economic development in our areas to help eradicate poverty.”