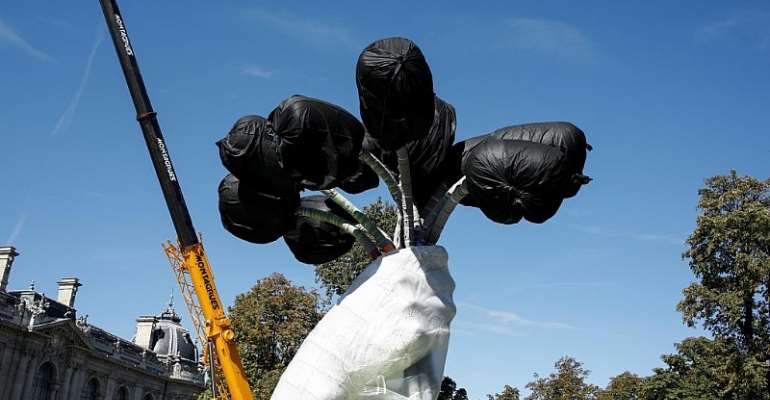 A controversial sculpture by American pop artist Jeff Koons, gifted to Paris after the 2015 terror attacks, is finally being inaugurated at a site that is partly obscured from view by trees.

Koons' 12-metre tall "Bouquet of Tulips" will be inaugurated Friday at a site near the Petit Palais museum, ending a four-year row over its location.

The monumental art installation, which weighs 33 tonnes and is made out of bronze, iron and aluminium, features a hand holding a huge bunch of multicoloured tulips. The gesture is intended to mimic how the figure in the Statue of Liberty grasps her torch.

Koons created the bouquet after being asked to come up with a work symbolising America's solidarity with France in the wake of the 2015 Paris attacks, in which 130 people died.

But the site originally proposed for the work - outside the Palais de Tokyo contemporary art museum, on an esplanade facing the Eiffel Tower - quickly ran into resistance.

Last year, dozens of artists, gallery owners and officials penned an open letter objecting to the location, arguing it smacked of "product placement" by an artist known for his "spectacular and speculative" works.

Others argued it would block views of the Eiffel Tower.

On Tuesday, Koons told Le Figaro he was "saddened" by the row, which he claimed was triggered by "a lot of misunderstandings and misinformation".

The 64-year-old insisted he hadn't chosen the Palais de Tokyo site himself, saying it was one of several locations proposed by the city of Paris and which he had thought would be "marvellous for my piece”.

In October, the city of Paris announced it had finally found a new location for the orphaned flowers in a garden behind the Petit Palais.

Koons said the controversy had been "painful" but the sculpture had given him a "magnificent opportunity to show my respect and love for France and the French."

Koons said the proceeds of the sculpture's copyright would be shared between associations representing terror victims and the city of Paris.