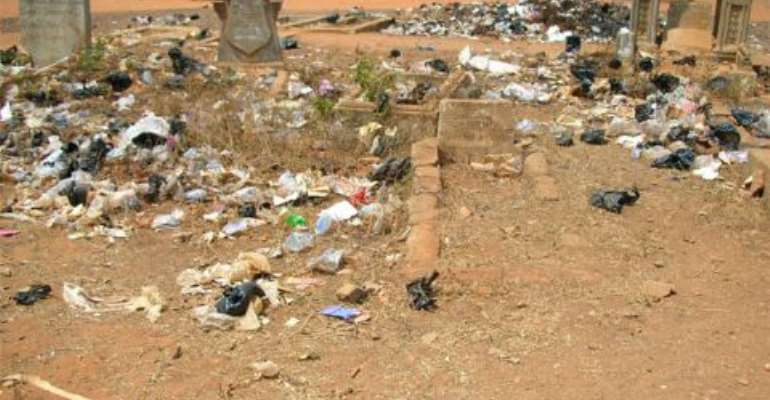 ...Ghana IGNORES fallen hero's burial site Accra, Feb. 28 (GHP) -- As wreaths were laid at the Osu Cenotaph on the 58th anniversary of the three ex-servicemen who were gunned down at the Christianborg Crossroads, let us take sometime to reflect on these Ghanaian fallen heroes final resting place. Corporal Attipoe and Private Odartey Lamptey's final resting places are not known by this author. However, the author chanced upon the final resting place of Sergeant Adjetey while on an educational research assignment at the La Primary JSS in La. This school is located with a cluster of other schools, kindergarten, primary, and JSS. On February 28, 2006, as Dr Kwame Addo Kufuor, Minister of Defence, laid a wreath on behalf of the government and people of Ghana and Lt-Gen J.B. Danquah, the Chief of Defence Staff, laid one on behalf of the security services, the Chairman of the Veterans Association of Ghana laid one on behalf of ex-servicemen and while Nii Adote Obuor, Sempe Mantse and Acting President of Ga Traditional Area, laid one on behalf of traditional rulers, my question to all these honorable men is, “Have they seen/visited the final resting place of these heroes they are remembering?” It was also reported that over 120 men drawn from the Army, the Air Force, the Navy and the Police Service and three officers formed the parade, which was under the command of Major F. D. Arthur to march in remembrance of these fallen heroes. Not to be left out, Major D. B. Bangsiibu, Director of Religious Service of the Ghana Armed Forces, Major S. S. Adam, Chief Imam of the Ghana Armed Forces, and the Osu Wulomo performed their incantations as required by their religion. All these noblemen of Ghana came out today to truly honor these heroes but a visit to the final resting place of Sergeant Cornelius Frederick Adjetey begs one to ask, “Are Ghanaians really proud of their heroes?” The pictures attached depict how FILTY and DISGUSTING the final resting place of this man who gave his life for Gold Coast and is being honored by all today. It is a crying shame on all Ghanaians especially the citizens of La to have their native son's final resting place turned into a garbage collection point. To add insult to injury, the cemetery is located right smack in the middle of their institution of learning. Professor S.K.B. Asante, an international consultant and educationist, said education was the key to prosperity in "this brave new world of the 21st century". Please Prof. Asante, visit the site where the children of La and its environs get a start for “this brave new world of the 21st century". If we truly believe that education is the engine of growth for development and the progress of the nation and all sectors of national life revolved around education, then why in heavens name should we as a country subject our children to such sub-standard educational environment? Could we not have spent the money used for the parades and dinners to mark this February 28 anniversary to clean-up this eye sore at La Primary and JSS? Are we really serious? Lining up all these men with huhudious titles to perform ceremonial acts while nothing worthwhile is being achieved. Today, all Ghanaians should bow their heads down in shame as we remember our fallen heroes. It is my fervent hope that by next year as we celebrate our 50th independence anniversary, we, ALL GHANAIANS endeavor to clean-up Sergeant Cornelius Frederick Adjetey's final resting place. If we didn't know or have forgotten, burial grounds are sacred and should be treated as such.

Election 2020: Challenging My Opponent's Identity Will Not S...
21 minutes ago