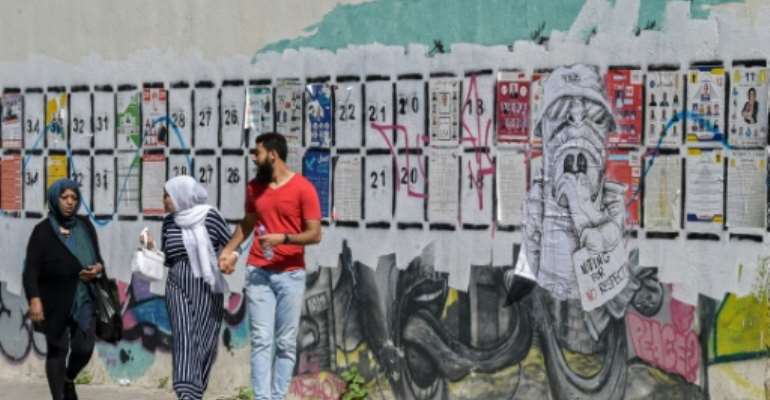 More than 15,000 candidates, running on more than 1,500 lists, are competing for 217 seats in Tunisia's leglislative polls set for Sunday. By FETHI BELAID (AFP)

Just weeks after Tunisians rejected ruling political parties in the first round of presidential polls, voters are set to return to the ballot box on Sunday to elect a new parliament.

Roughly seven million voters are spoilt for choice in this parliamentary election, the second since Tunisia's adoption of a new constitution in 2014 and the third since the 2011 uprising that toppled long-time dictator Zine El Abidine Ben Ali.

But the high candidate turnout has not been matched by voter engagement, as the presidential election largely eclipses the parliamentary poll.

With the death of president Beji Caid Essebsi in July, the presidential polls were brought forward from November, sandwiching the October 6 legislative vote between two rounds.

"The majority of people are completely uninterested in the legislative elections," said candidate and lawyer Ghazi Mrabet.

In a first for Tunisia's fledgling democracy, debates were held between candidates ahead of both the presidential and legislative elections, with the former drawing significantly more viewers.

But while voters may be more interested in who becomes head-of-state, it is parliament that is responsible for tackling the main issues preoccupying Tunisian society.

The rejection of the ruling political class in the September 15 presidential vote was rooted in frustration over a stagnant economy, high unemployment, failing public services and rising prices.

Observers expect voters will use the legislative poll to reinforce their choice of political outsiders in the presidential race.

The electorate sent media mogul Nabil Karoui through to the second round, despite him being detained in a money-laundering probe.

He came in behind Kais Saied, a fiercely independent and socially conservative law professor.

A strong performance by Karoui's Qalb Tounes party in the parliamentary election could boost Karoui's chances in the presidential run-off.

For his part, Saied has shunned the party system and offered no endorsements, leaving parties to court his diverse array of supporters.

Compared to 2014, when the Islamist-inspired party Ennahdha and the anti-Islamist big-tent party Nidaa Tounes shared power, the outcome of these elections is unpredictable.

At least a third of the lists is independent, adding to the challenge of understanding a political landscape already fractured into a multitude of parties with few substantive differences.

"There is no clear polarisation, which is accentuating the lack of enthusiasm," said Michael Ayari, Tunisia analyst with the Crisis Group.

The main party in parliament with 69 seats, Ennahdha's credibility as a force for change has been damaged among its base for allying with political elites.

It has since ruled out any possible alliance with Karoui's party.

Karama has presented itself as an ally of Saied, who denies ties to the party.

The publication of opinion polls is prohibited but according to informal surveys, independent lists could lead the poll.

The party that wins the most seats will have two months to form a government, which needs a majority of 109 votes.

Preliminary results are expected on October 9.

"It is possible that no majority will emerge to form a government in the time provided by the constitution," said Ayari.

Prolonged uncertainty would be unwelcome in Tunisia, hailed as the Arab Spring's sole success story but straining to meet the 2011 revolution's other demands of "work and dignity".

While it has succeeded in curbing terrorist attacks that rocked the country's key tourist sector in 2015, it remains hampered by austere International Monetary Fund-backed reforms.

Row after French scientists suggest virus vaccine trial in A...
1 hour ago