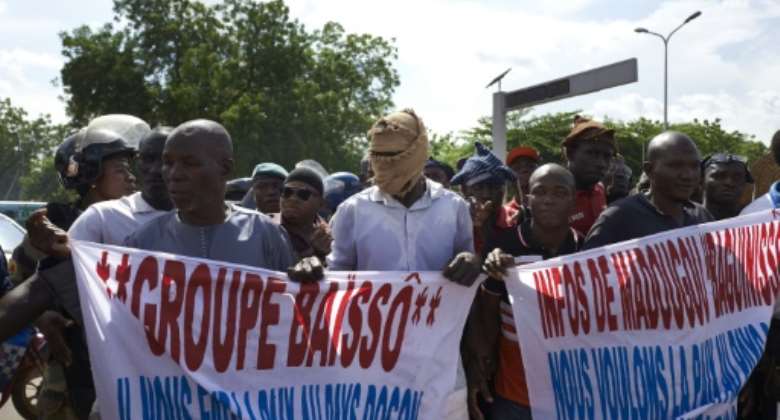 The death toll in two jihadist attacks this week on Malian military camps near the Burkina Faso border has risen to 38 soldiers, the defence minister said on Thursday, calling for unity.

"I am very proud... of these paratroopers, who defended their positions. But unfortunately, today... we buried 38 bodies," Ibrahima Dahirou Dembele said on national radio.

The minister speaking from the scene of one of the attacks at Boulkessy said 33 missing soldiers had been found alive, eight of whom were receiving treatment. He did not say how many more, if any, were still missing.

An earlier death toll following the attacks on Monday and Tuesday put the number of fatalities at 25 troops, with dozens missing.

"In spite of this hard blow, we have to stick together. It's a tough difficult fight. But in the face of this war, we have to remain united behind our leader (President Ibrahim Boubacar Keita)," the minister added.

The militants aboard heavily-armed vehicles raided two military camps at Boulkessy and Mondoro.

Fifteen jihadists were killed in the raids, according to government figures, which began early Monday and were quelled more than a day later.

The attacks were eventually subdued with the help of Malian special forces and foreign allies, including French warplanes and helicopters.

Hundreds of angry youths and wives of soldiers demonstrated outside a military camp in the capital Bamako late on Wednesday.

"We came here because the government is not telling the truth about the number of dead," a woman demonstrator told AFP.

"It's our husbands, the red berets, who are at Boulkessy."

"My father is a soldier, he's at Boulkessy, and I haven't any news of him," said 15-year-old Ali Oumar Diakite. "They're lying to us. The army is under-equipped."

The losses come as a crushing blow to Mali's armed forces, which are flailing in the face of a jihadist revolt that has spread from the arid north to its centre, an ethnically mixed and volatile region.