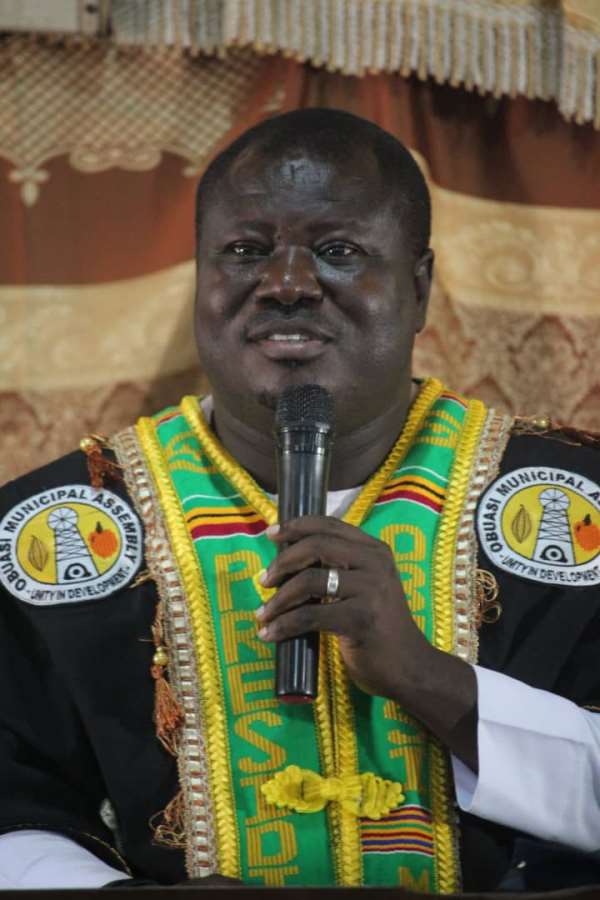 The Presiding Member of the Obuasi Municipal Assembly, Honorable Lawrence Nana Bondah- Obeng has made a passionate appeal to Assembly Members and Unit Committee members to continue to collaborate with Traditional leaders to oversee to the activities of their Electoral areas before a new Assembly is reconstituted.

This was contained in his farewell speech to Assembly Members at a General Assembly meeting held on Tuesday, 1st October, 2019 in Obuasi. The meeting which was the last meeting to dissolve the Assembly following a directive by the Ministry of Local Government and Rural Development for all Assemblies to be dissolved by Monday, 7th October, 2019.

Hon. Bondah--Obeng quoted Act 246 of the 1992 Constitution and Act 936 Section 6 (1) of Local Governance Act, 2016 which stipulate the term for District Assembly. Again, he said, Act 244(3) of the 1992 Constitution and the Section 10 of the model standing orders of MMDAs and Act 936, Section 17 of the Local Governance Act offer the Presiding member the authority to dissolve the Assembly at the end of each meeting.

He praised the Assembly members for their diligence, hard work and commitment to duty, during the period. He said " you have fought a good fight, you have ran a good race, what is left is for the electorates to recognize your good works and contributions and reward you accordingly by giving you another mandate to represent them come 17th December, 2019".

The Presiding Member who is known to have instilled discipline in the House since he was sworn- in on 19th June, 2018, again said, it is his hope that the next Assembly would emulate the enviable qualities and standards set by this Assembly.

On his part the Municipal Chief Executive, Hon Elijah Adansi-Bonah congratulated the Assembly members for their hard work and team work since their elections in September, 2015.

He praised them for their commitment and dedication to duty which he said, has benefited the Assembly in diverse ways.

On the impending District Assemblies elections, Honorable Adansi-Bonah advised Assembly members and the Unit Committee members to manage themselves well and run a decent campaign devoid of insults and threats.

Honorable Kwaku Kwarteng, the Member of Parliament for the Obuasi West Constituency was present at the meeting and took part in deliberations.