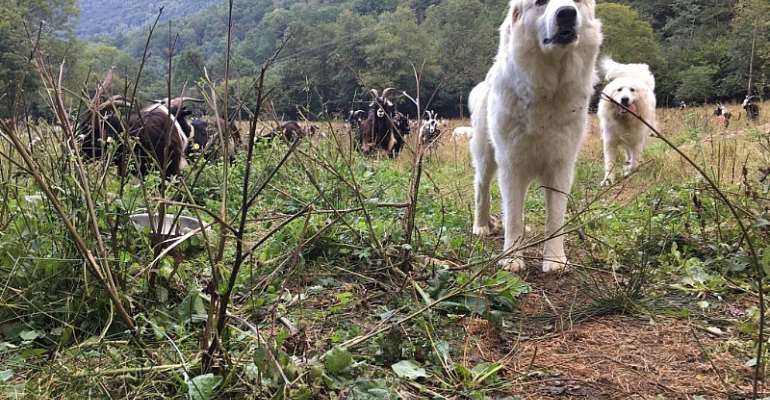 Great Pyrenees dogs are one of three measures of protection France's government has proposed to protect grazing mountain herds from attacks by brown bears. This third of three reports on the growing number of bears in the Pyrenees explores the benefits and challenges of using the dogs.

Great Pyrenees dogs, known in familiar French as patous, were bred in the Pyrenees centuries ago as a means of protecting herds from predators in the mountains. Today, they have spread around the world and are still used in their region of origin.

“Dogs are born and raised within the herd,” explains Miguel Barbosa, whose two patous, Nouki and Kibaa, play a key role in protecting his herd of goats near the town of Siguer in the French department of Ariege.

“They're always with the animals. Their role is to dissuade predators from approaching, or to push them away. That mainly means other dogs, but it can also mean bears.”

Dogs work with shepherds and fences
Reports of bear attacks are on the rise in Ariege, which contains one of the highest concentrations of the brown bears whose numbers have grown as part of a government-backed population reinforcement plan.

As omnivores and opportunistic predators, bears have been blamed for attacks on individual and small groups of herd animals. In more dramatic incidents, bears have frightened sheep into running blindly off cliffs by the dozens or hundreds.

To help farmers adapt, the government offers help when it comes to training patous, hiring shepherds and setting up protective fences, a model that suits Barbosa.

“If there's no human around, that's when you have flocks being frightened and plunging off cliffs,” he explains. “With humans, it's easier to manage, even if there's no guarantee accidents won't happen.

“The dogs do a good job, too,” he continues. “They bark to let us know when someone is nearby, they protect the herd, they round up the herd. I think they make a real difference.”

Debate over effectiveness
Barbosa's family used Great Pyrenees dogs and the other measures when they kept a flock of sheep on the mountain and report suffering minimal damages, even between 2007 and 2009, when a bear was known to be in the area.

But many farmers say it is one thing to protect smaller herds, and another to protect flocks of more than a thousand sheep spread over the thousands of hectares of rugged mountain terrain, a common practice in Ariege.

Critics object, saying the model proposed by the government would mean deploying dozens of dogs and shepherds around each pasture. They say this is impractical, time consuming and costly, even with heavy subsidies.

Concerns for hikers
Another concern when it comes to Great Pyrenees is that they protect herds from everyone, including the hikers that often cross the high mountain pastures. Three people were bitten in the French Alps in August, and a man bitten in the Drome region called in September for shepherds to do more to control their dogs.

Keeping such encounters from happening involves understanding on the part of both hikers and shepherds, not to mention adequate training and discipline for the dogs themselves.

“In general, there are few problems, but it depends on how people react,” Barbosa says. “Some people are afraid of dogs, some make the wrong gestures. That's why it's important to have a shepherd around, because accidents happen when dogs are left alone. In general, if you're there, you can tell the dogs to stop and they listen to you.”

There is also a question of how dogs would perform when actually faced with a considerably larger brown bear.

“I don't know if two dogs are enough to fight off a bear,” Barbosa says. “But when it comes to protecting about a hundred goats, I think two dogs are sufficient.”

Bawumia to deliver keynote address at Nottingham University ...
3 minutes ago