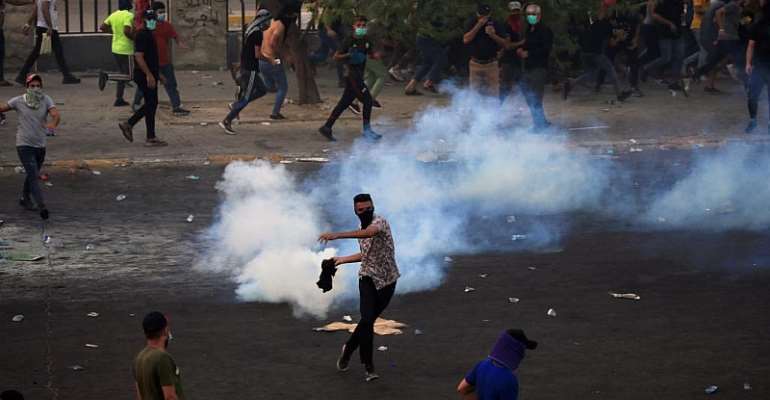 At least 21 people have been killed after Iraqi security forces fired live rounds and tear gas to break up a third day of anti-government protests.

Iraqi authorities have also imposed an around-the-clock curfew in the capital Baghdad in an effort to thwart protests that have gripped the country since Tuesday.

The curfew was announced early Thursday following a meeting of Iraq's top leaders to discuss the demonstrations.

Internet access has also been cut across much of Iraq.

The streets of the capital remained relatively deserted throughout the day, apart from central Tahrir Square where hundreds were gathered.

But as demonstrators moved near a bridge that leads into the Green Zone, Iraqi security forces began to shoot above the crowd and fire tear gas, according to a cameraman from Associated Press at the scene.

The protests are in response to a deteriorating economy, lack of jobs and rampant corruption in the government.

Organisation of protesters
Protests have been concentrated so far in Baghdad and in southern Shiite areas. They appear to be spontaneous without any known leadership.

The protesters are mainly young, disenchanted youth demanding improved services such as electricity, water, and ultimately an end to the country's endemic corruption.

While news of the protests has spread across social media, the demands of the protesters have also expanded, now also including the resignation of the government.

Challenge to government
The protests and unrest are seen as the most serious challenge to Prime Minister Adel Abdul-Mahdi's one-year-old government.

With tensions high between Iran and the United States, Baghdad, an ally of both, has found itself caught in the middle.

"We believe that peaceful, public rallies are a fundamental element of all democracies; there is no place for violence in those demonstrations,” the statement said.