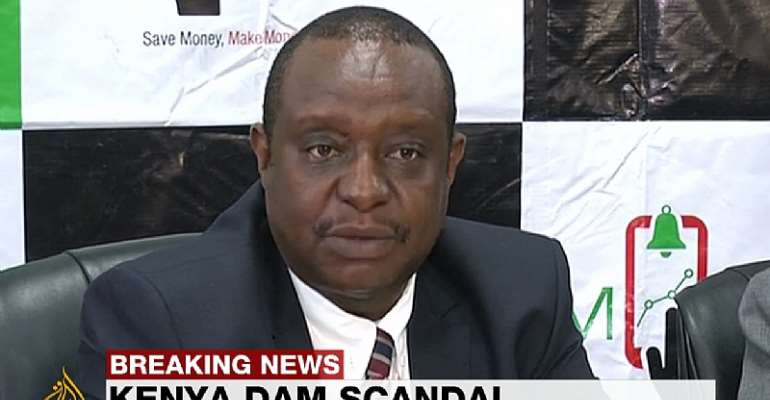 For the last few weeks, according to two videos forwarded onto my WhatsApp page/wall on Tuesday, 2 October 2019, as broadcast by al Jazeera Nairobi, the President of Kenya, His Excellency Uhuru Kenyatta, has taken his promised fight against corruption very seriously. In fact, he has taken the bull by the horns, thus, to do something difficult in a brave and determined way.

Some officials, including Government Ministers and Civil Service personnel, who have been caught for embezzling public funds, or are engaged in acts of corruption, have not only been arrested but have had their buildings acquired through corruption bulldozed. The President is not taking any ifs or buts for excuses or answers in his resolute determination to eradicate corruption from Kenya, or at least, to curtail its official practise in the country.

Corruption is the number one cause of poverty in Africa in general and Ghana in particular. Therefore, any President who fights that canker seriously and successfully, endears himself to the public. Go to Kenya as I write, to see how the public are hailing President Kenyatta for seriously dealing corrupt officials merciless blows.

However, when you come to Ghana, President Nana Akufo-Addo's promise to fight corruption, subsequent upon which many Ghanaians including myself campaigned and voted for him and the NPP, has become just a complete joke. It seems to have become a political gimmick with all that the President says becoming a mere rhetoric. His intentional determination to fight official corruption is not materialising on the ground. It is devoid of substance.

Good intention alone cannot bring about world peace. It has to be backed up by practicalities! Yes, President Nana Akufo-Addo has done whatever it takes to get the Office of the Special Prosecutor created with a renowned anti-corruption czar in the person of Hon Martin Amidu, appointed as the Special Prosecutor. Nevertheless, without the creation of a Special Anti-Corruption Court, but relying on the normal courts with corrupt judges presiding over cases with their nonsensical incessant postponements of cases with the aim of selling justice to the highest bidder, but not basing their verdicts on facts and credible evidence submitted to the court, the Office of the Special Prosecutor has only, but become, a white elephant. Subsequently, Hon Martin Amidu has become a parrot, talking a lot without any positive results instead of becoming a silent eagle flying higher to the ends of the sky, thus, getting positive results to the admiration of all serious thinking Ghanaians.

Jesus Christ in the bible says in Matthew 9:16-17, " No one sews a patch of unshrunk cloth on an old garment, for the patch will pull away from the garment, making the tear worse. Neither do people pour new wine into old wineskins. If they do, the skins will burst; the wine will run out, and the wineskins will be ruined. No, they pour new wine into new wineskins, and both are preserved"

The President and Ghanaians can search for the meaning of the parable as just cited. Simply explained, old methods cannot be acceptable to solving new and daunting problems. The old way of doing things must give way to new methods when faced with new and evolving problems. Therefore, resorting to the old corrupt legal means of solving the devastating official corruption engulfing Ghana like a midsummer bush fire will not work. It will rather automatically negate the essence of creating the Office of the Special Prosecutor as we are today witnessing.

Then Presidential-candidate Nana Akufo-Addo appealed to Ghanaians and won Election 2016 for himself and NPP principally based on his promise to fight corruption in Ghana. From his personal record of incorruptibility and sternness, many a Ghanaian believed and trusted him as the man to eradicate corruption from Ghana. But what do we see today? He is completely incapable of honouring his promise to fight corruption!

His remarked incapability to fight corruption has empowered the pot (in this case NDC) to call the kettle (NPP) black. What a sarcasm! I feel pain and shame to see the NDC having the guts to taunt the President on matters of corruption. But who is to blame?

To be a good and a successful President, achieving your campaign promises, you must be pragmatic and honest with emphasis on pragmatism. You cannot say, I am a democrat through and through to governing a nation like Ghana and of course, an African country. No! If you do, you will fail!

Why are Presidents Paul Kagame of Rwanda and John Joseph Magufuli of Tanzania so successful in fighting, if not eradicating, corruption from their countries? Why is President Uhuru Kenyatta unleashing fierce attack on corruption; destroying properties acquired corruptively by some government and civil service officials? He is now seen as an action man who means what he professes.

How I wish I could reproduce the actions being taken by President Uhuru Kenyatta to successfully annihilate corruption to the joy of the Kenyan public as are in videos forwarded to me on my WhatsApp page. Police officers taking bribes on roads are being arrested by the anti-corruption squad formed by the President in what is teasingly said by the newscasters as, "the hunters are being hunted". A Military officer in-charge of an ongoing recruitment of people into the military found to have taken a bribe of 30,000 Kenyan shillings from a person seeking recruitment into the force has been arrested.

Once arrested, you are summarily dealt with. This is the beauty of fighting corruption but not where the courts help to delay the cases and in the end the corrupt officials are left doing their own thing. It is a shame on the President, the government and our judicial system. This is a sign of weakness that no Ghanaian will be proud of. Many a Ghanaian feel disappointed in the President. Many are those that have decided not to go to the polls come Election 2020.

It is never too late for the President to imitate his colleagues in Rwanda, Tanzania and Kenya, if he wants to go down in history as a President who successfully fought corruption in his country.

I pray the President does not become obstinate but to listen to good advice from his critics who actually wish him a success in his governance of the country.

Yes, he has done well by implementing Free Senior High School education in Ghana. Nonetheless, he will endear himself more to the people if he seriously fights corruption. If Hon Martin Amidu takes people to court charged with corruption without the case being prosecuted but lingering in court, it would be better if no-one was taken to court at all.

Alfred Agbesi Woyome is still in Ghana a free man after swindling Ghana of such huge sums of money. What then were all the hullabaloos the NPP were making about collecting the money as soon as they were voted into power, if they were, when they were in opposition?

President Nana Akufo-Addo, please do something really positive about fighting corruption before campaign for Election 2020 starts in honest. Should you fail to adhere to my advice, I am afraid, it may become "Had I known to NPP" as "Obstinacy is the cause of the horns of the hornbill"

While I am waiting to get the videos said to have come on to my WhatsApp page to be posted on YouTube by their owners to enable me reproduce them in my publication for Ghanaians to see, let me show this one on the arrest of the Kenyan Finance Minister for corruption.