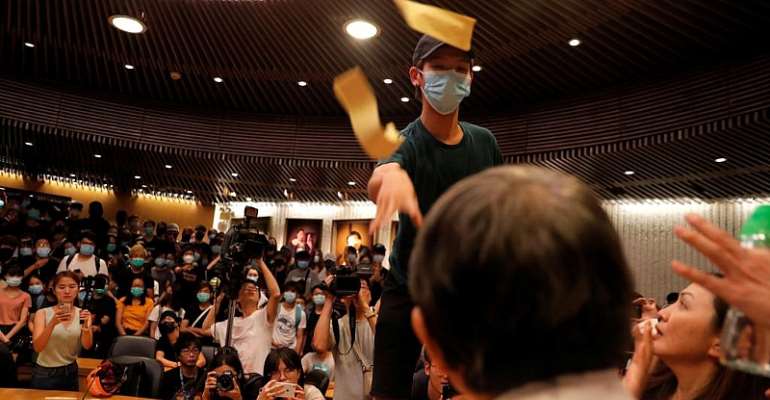 A Hong Kong protester shot in the chest with live fire has been charged with assaulting a police officer. Fresh clashes broke out between police and protesters after news that 18-year-old Tsang Chi-kin, who had just been released from hospital would face charges.

The Hong Kong police called on the region's authorities to introduce a curfew in the face of the continuing protests and after the use of live bullets on Tuesday.

The security forces were not the target of protestors' anger when the demonstrations began in June 2019 over the proposal to extradite convicted criminals from Hong Kong to China.

However, heavy-handedness on the part of the truncheon-wielding police in trying to disperse protestors, or vandals, and their habitual use of tear-gas, have turned the crowds against them and spiked tensions.

Flare-up
Tsang was shot in the chest on Tuesday by a policeman as he and a group of masked protesters reportedly assaulted officers with umbrellas and poles during the worst clashes of the summer.

Protest groups said the officer charged into the melee with his firearm drawn and failed to fire a warning shot.

The massive protests coincided with China's celebrations of 70 years of Communist Party which held a massive military parade in Beijing.

Agree to disagree
Opinion about the shooting is divided. Pro-democracy activists condemn the police and establishment figures say the use of such force was justified.

Police said 30 officers were injured in the clashes on 1 October.

Hospital authorities said more than 70 people were admitted on Tuesday.

Some journalists were injured.
Lawyers acting on behalf of an Indonesian journalist who was shot in the face by a police rubber bullet on Sunday said doctors have confirmed she would be at least partially blind in her right eye.

Enduring protests
The protests were sparked by a now-scrapped plan to allow extraditions to mainland China.

Beijing and local leaders took a hard line to those initial protests. Anger escalated and the movement embraced wider demands for democratic freedoms and police accountability.

Today, the protestors are maintaining momentum and their main demands are an independent inquiry into police conduct, an amnesty for those arrested and the persistent call for universal suffrage.

In spite of the pressure, Hong Kong chief executive Carrie Lam has remained in her post.