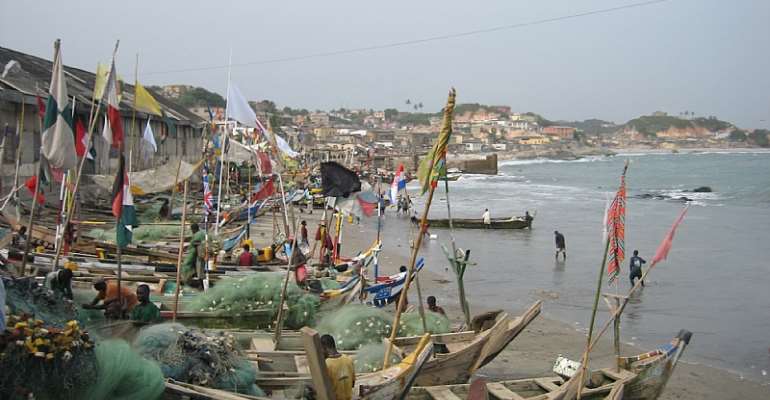 Government officials have visited the site earmarked for the construction of the Moree Landing site to announce government's readiness to commence the project as early as possible.

The visit follows the sod cutting by the President Akufo-Addo some two months ago.

Other officials including the Project Director, Mr. Benjamin Rishwain engaged the chiefs and fisherfolks at Moree with an appeal to assist the workers especially contractors with any kind of support to speed up the project.

Mr. Rishwain said the site which will be completed by next year will have a cold storage facility, iced block making factory, net mending shed, daycare center to help the fishmongers to send their wards to school among other amenities.

He indicated that the development of the fish landing site will ensure safety of fishing gears and properties as well as improve hygienic measures to meet international standard for export.

According to the Project Director, the completion of the landing site will help increase the productivity of fishers by providing safe place for berthing of canoes and fish handling.

Mr. Morris Donkoh, MP for AAK, noted that the project was a fulfillment of a campaign promise the President made to the people of Moree when he (President) visited the place in 2016.

He strongly believed the landing site project would also create jobs for the constituents and the nation at large.

On his part, the Minister of Transport, Mr. Ofori Asiamah said his Ministry will play a major role in the construction of fish landing sites.

According to the Minister, the project was to come to light under the former President John Agyekum Kufuor's regime but the loss of power brought it to a standstill.

In view of this, he said President Nana Addo is committed to making sure that Moree gets it fair share of the National cake which they have waited for years.

The DCE of AAK, Madam Aba Hagan who added her voice said the completion of Moree Landing site will help increase the Assembly's Internally Generated Fund (IGF) as well as create employment for the youth

The DCE appealed to the residents of Moree to put their political affiliation aside and embrace the project.