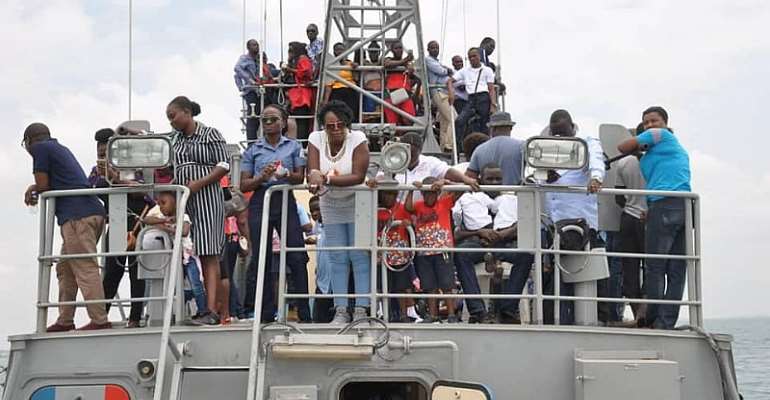 Some guests on board a Navy boat

As part of activities to celebrate the 16th-anniversary of the Ghana Navy, the Eastern Naval Command (ENC) in Tema, held an Open Day to strengthen relations between the Ghana Armed Forces (GAF) and the country's civilian population.

Thousands of civilians including children from various basic, second cycle schools in Tema and some personnel from other security disciplines were taken on a guided tour of the Navy installation.

There were drills, display of weapons, Navy uniforms, speed boat display and other activities.

The Flag Officer Commanding, Eastern Naval Command, Commodore Samuel Walker, explained that the objective of the Open Day is to get the citizenry to have a better understanding of the naval establishment as a first step towards fostering friendly ties between the Ghana Navy and the public.

He called for cordial relations between the military and the civil society, entreating civilians to dispel the notion that the military is unfriendly.

The Flag Officer Commanding was optimistic that the day will reconcile and bring together civilian and the military in the society and also correct the myth surrounding the perceived fearful nature of the place.

Members were also given a sea trip ride by the Navy.

Some children and adults who participated in the event could not hide their exhilaration.