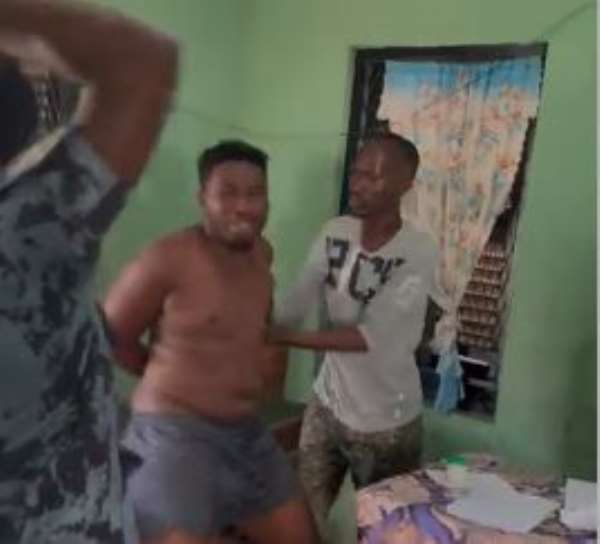 A soldier slapped a policewoman and a police officer flogged a suspect at the Railway Police Station in Koforidua. These are two stories which downgrade our status as a civilized society.

While the story of a soldier slapping a policewoman because he was drunk and did not understand the implication of his action is understandable, the flogging of a suspect by a cop can only be informed by stupidity on the part of the cop or even abuse of authority bestowed upon him by his uniform.

We can bet that the cop's act was captured on video by one of his colleagues because of the sheer abuse of power he was exhibiting.

The cop was stupid because in this day and age such obscene scenes will almost surely be captured by persons watching the act because of its weirdness.

No police officer has the authority to whip a suspect and so when it happens in today's Ghana, not under a military junta, we are constrained to read all manner of meanings into the nonsense including condemning the mindset of some cops.

Many Ghanaians including the Daily Guide have asked for the umpteenth time that the curriculum of recruits be upgraded to include PR or even etiquettes.

Unless the mentality of looking down upon others outside the uniform is not stopped among some police officers the kind of nonsense which prompted this editorial will persist and to our detriment.

Assuming that in the course of flogging the suspect there was a fatality the cop would have turned around to narrate a different story to suit his interest.  The human rights of suspects must be respected at all times.

The Police Administration has issued a statement through, of course, the Public Affairs Department of the Service about the interdiction of the defaulting cop.

We are interested in finding out whether this is the first time that the cop is involved in flogging a suspect and whether that is a feature of that particular station.

But for the newspaper revelation of the anomaly nobody would have heard about it and the bad cop would have continued to flog suspects.

Under the circumstances, it is our position that the station officer be interdicted too for negligence of his duty. The District Commander has questions too to answer about the quality of his supervision of the station. Flogging of suspects cannot go on under their noses – District Commander and Station Officer – without their knowledge.

Policing in a democratic dispensation and a civilized society is a serious profession and occupation. We cannot contain such bad nuts in uniform. We, therefore, urge that the matter is treated with the seriousness that it deserves.

As for the inebriate soldier, we are lost for words about his conduct. We expect that the level of alcohol in his system would have been measured as soon as he was arrested.

We salute the courage of the civilians who overpowered the soldier until some cops came to take him away.

Only alcohol would make a soldier slap a female police officer two times because she only told him not to park his car where he did.

It is our expectation that the police would apply the civil law appropriately by especially putting the suspect before a court of compete jurisdiction.

Those in the regimented services must conduct themselves decently and not waywardly as though the country is being managed by a rag-tag militia.

The appropriate signal should go to the ilk of the inebriate soldier about how alcohol can impact negatively on their actions and what can befall them when they mess themselves.