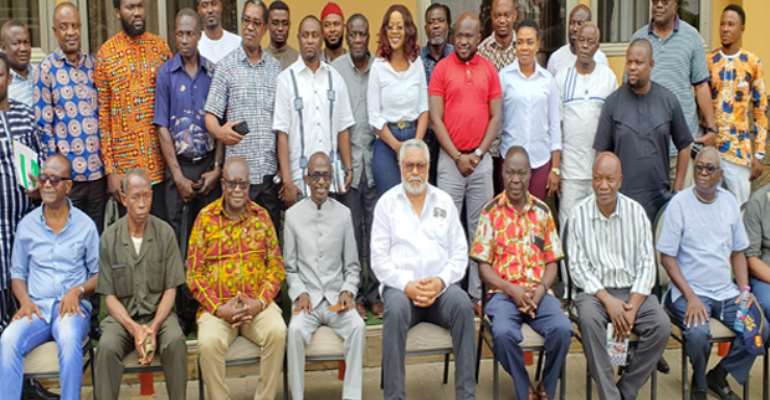 Rawlings in a group photograph with some of the Cadres

The Founder of the National Democratic Congress (NDC), Flt. Lt. Jerry John Rawlings, has criticised former President John Mahama for lacking the commitment to fight corruption when he was in office.

According to him, then President Mahama did not do anything meaningful regarding the fight against corruption.

Speaking during the official opening of this year's annual National Cadres Conference at Ejisu in the Ashanti Region last Saturday, Mr. Rawlings said the corruption canker would have been defeated by now had Mr. Mahama acted appropriately.

He claimed then NPP administration led by President Kufuor maltreated them (NDC members) whilst in opposition but they lived to wrest power from them (NPP) in 2008.

He said Mr. Mahama had all the opportunity to prosecute the corrupt ministers in the erstwhile Kufuor administration but he strategically failed to do so.

Mr. Rawlings said Mr. Mahama refused to punish the corrupt past government officials because he was scared that he and his appointees would also suffer similar fate after exiting power.

“After winning power, the Mills/Mahama government did not listen to my admonishment to prosecute corrupt officials in the Kufuor administration even though there was a proof,” he claimed.

“I pressurized them to crack the whip on the corrupt officials but they refused. Mills would always say he was chosen by God just to rebut my advice to crack the whip. Then it came to Mahama who also left it like that so that he too could go and take refuge there when he had exhausted his time in political office,” he added.

The NDC founder argued strongly that corruption in government would have been nipped in the bud now had Mr. Mahama taken a bold decision to prosecute NPP appointees.

Mr. Rawlings also took a swipe at the current government for not taking the corruption fight seriously; he pointed out that some government appointees ought to be punished.

According to him, some people had clearly flouted the law by indulging in corrupt practices, yet they were roaming about freely because the law was not biting hard enough.