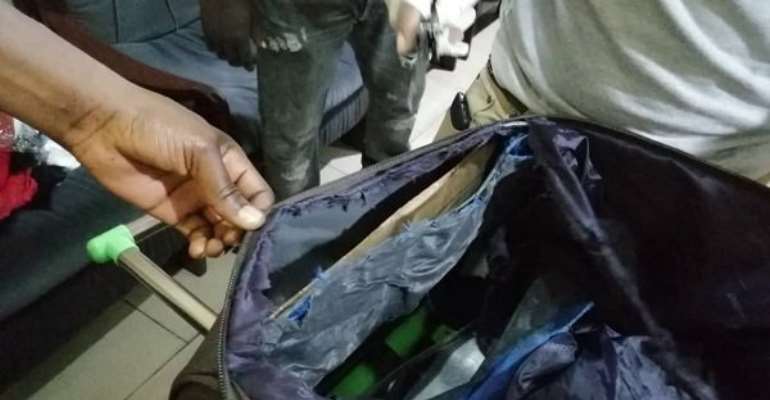 One of the bags in which the substance was concealed

The Narcotics Control Board (NACOB), in a twist of events, has stated that the whitish powdery substance found on two Nigerians at the Kpeglo Border Post last Friday is not cocaine but ephedrine.

Ephedrine is an odourless, white, powdered substance used in the preparation of legal drugs and also methamphetamine, a strong and highly addictive drug that affects the central nervous system and which has no legal use.

The Customs Division of the Ghana Revenue Authority (GRA) had earlier stated that a preliminary test it had done on the powdery substance indicated the stuff was cocaine.

However, the Head of the Enforcement Unit at NACOB, Solomon Stanley Eyo, told the Daily Graphic in Accra on Wednesday, October 2, that as the state institution clothed with the law to conduct tests on suspected narcotic drugs, NACOB took centre stage in the investigations and found out that the substance was ephedrine.

Explaining what might have led the Customs officials to suspect that the substance was cocaine, he said: “It [substance] is whitish and powdery and I think that's where the problem comes from; it's not every white thing that is cocaine.”