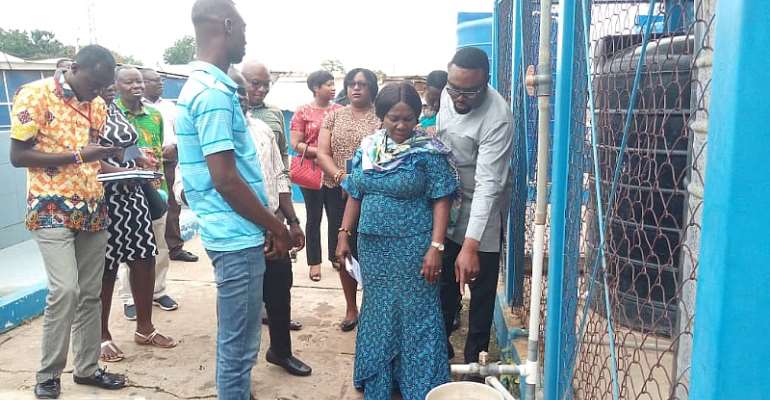 Minister for Sanitation and Water Resources, Hon. Cecilia Dapaah inspecting the sanitary conditions of a water station at Amasaman during the tour

The Minister for Sanitation and Water Resources, Hon. Cecilia Abena Dapaah continued her tour of the Greater Accra Region on Wednesday by inspecting the Ga West and North Municipalities, through to the Okai Kwei North and Ayawaso Central Municipalities.

The exercise which commenced last month is part of the Ministry’s effort to see to it that every Municipality within the region is adhering to policies that will promote good sanitation to ensure that Accra becomes the cleanest city in Africa as charged by President Addo Dankwa Akufo-Addo.

The Minister and her entourage started off yesterday’s inspection from the Ga West Municipal Assembly in the company of the MCE for the area Hon. Clement Nii-Lartey Wilkinson.

From there, the team went through the Ga North Municipality before moving on to the Okai Kwei North. The last municipality inspected was the Ayawaso Central where the Minister for Sanitation and Water Resources Hon. Cecilia Dapaah was particularly pleased with the sanitation situation of the area.

At the end of the tour, the Hon. Cecilia Dapaah applauded the MCE’s and DCE’s for a good work done whiles expressing delight how the general public has gradually taken up the responsibility of keeping all surroundings clean.

“The MCE’s are working very hard. And the populace, I must give that credit to Ghanaians. The citizenry we are the beneficiaries of government interventions and I must say they have been highly cooperative. I commend them highly.

“They should continue to cooperate with our MCE’s and our DCE’s all over Ghana to make their work bearable and easy," the Minister noted.

Several inspection exercises will be undertaken this month before the Ministry moves to other regions to check the progress of work on the grounds by the MCE’s and DCE’s as far as sanitation is concerned.