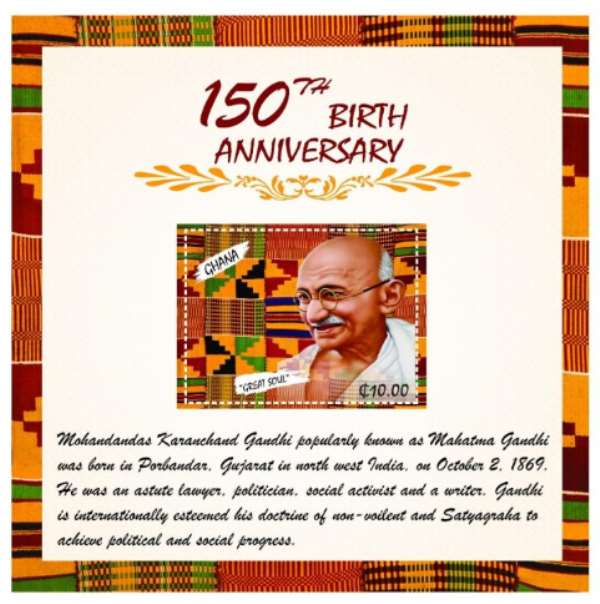 The Ghana Post Company in collaboration with the Ministry of Communications and India High Commission in Ghana has launched a commemorative stamp in Accra to mark Mahatma Gandhi's 150th birth anniversary.

Mahatma Gandhi was an Indian lawyer, anti-colonial nationalist, and political ethicist, who employed nonviolent resistance to lead the successful campaign for India's independence from British Rule, and in turn, inspire movements for civil rights and freedom across the world.

Key features of the postage stamp include a depiction of Mahatma Gandhi himself, the stamp was issued on a sheet containing one stamp with the Adinkrahene symbol, which symbolizes supremacy and the Kente depicting royalty.

Mahatma Gandhi's Postage Stamp is meant among other things to showcase the importance of the close relations between India and Ghana on his150th anniversary.

The Deputy Managing Director of Ghana Post, Mr. Kwaku Tabi Amponsah, in his address, said the launch of the stamp came at the right time especially at a time Ghana Post will be celebrating the annual World Post Day.

He said the Ghana Post was proud to collaborate with the Indian High Commission to issue a special commemorative stamp with a portrait of Mahatma Gandhi.

Mr. Kwaku Tabi Amponsah encouraged stamp collectors to visit the offices of Ghana post to purchase some of the different kinds of stamps.

"We are proud about the fact that, gradually, our partnership with government, industry, and the private sector is bearing fruits in the supreme interest of mother Ghana and we are happy about this feat. This year, as part of the Indian government’s efforts to appreciate how Mahatma Gandhi's ideas, words and actions mean to people around the world and how people use his philosophy for guidance in building their own future, there is a worldwide 150th birthday celebration. Ghana Post is proud to collaborate," he said.

He mentioned that the Philatelic Unit of Ghana Post deals with the publication of commemorative and definitive stamps.

"Currently we have various stamps of Queen Elizabeth, Prof. Evans Atta Mills, Aburi Botanical Garden, and many others. We will encourage stamp collectors to visit us for many of these heartwarming stamps," he stressed.

The Deputy Minister of Communications, Hon. George Andah, who officially launched the postage stamp described Gandhi's personality as a man of 'Non-Violence'.

Touching on the importance of stamps, the minister stated that Stamps facilitated communication, carried messages embedded in their usage and the imagery signifies that appropriate payment had been made for the service of transporting a letter.

He said symbolically, stamps express meaning for a variety of actors and the commemorative stamp of Mahatma Gandhi is refreshing news for all especially Postage stamp collectors and photo stamp dealers who are always on the lookout for exceptional stamps.

According to the minister, Mahatma Gandhi's contribution to social and political issues is worth emulating.

He, therefore, urged the youth to stay away from violence and adopt a non-violent approach to expressing their grievances about critical matters in society.

The Ghana Post Board Chairman, Mr. George Afedze Hayford, in his address, expressed optimism that the Mahatma Gandhi stamps would obviously be sent all over the world to reiterate the good deeds of the great Gandhi.

"This is a man whose first legacy was simply his strong belief that all people can shape and guide their lives according to the highest ideals, no matter how insignificant and powerless they might feel themselves to be,” Mr. Afedze Hayford pointed out.

On his part, Mr. Birender Singh Yadav, the Indian High Commissioner to Ghana revealed that Gandhi was a symbol of peace worth emulating, hence, the commission decided to partner with the Ghana Post for the issuance of the Stamp for his legacy.

He commended the work done by the Ghana Post and called on everyone to work hard to push the vision of Mahatma Gandhi in building an inclusive and harmonious society for all without the use of weapons.

Trade Minister’s promise to open Komenda Sugar factory ‘a me...
29 minutes ago