As Libya's war drags on, Tripoli drowns in waste 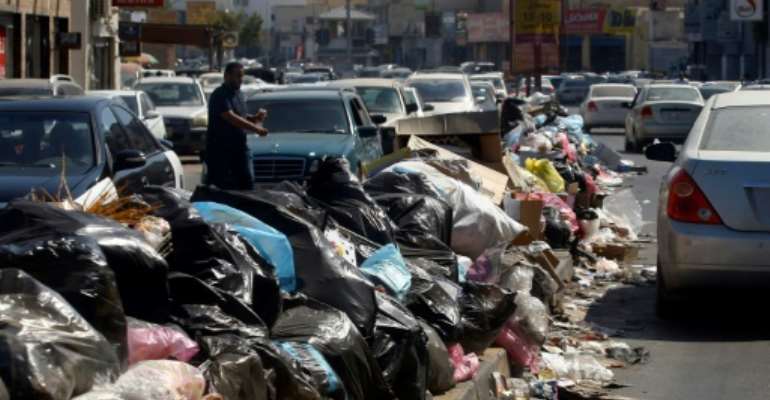 Across Libya's capitol Tripoli, tonnes of waste overflows from bins and piles up on roadsides. By Mahmud TURKIA (AFP)

Faraj al-Doukali hastened to unload the dozens of rubbish bags from his van onto a sidewalk dump in Siyahiya, a residential district west of the Libyan capital.

"Each weekend I collect the rubbish from my four brothers at the farm where we live and I look for somewhere to dump it. I have no choice but to leave it here on the footpath," he said.

Across Tripoli, tonnes of waste overflows from bins and piles up on roadsides.

The rubbish crisis adds to the daily ordeal for residents of the capital, where life is already punctuated by shortages of fuel, electricity and water.

Fed up with the smell and the sight of rats and stray cats feasting in the garbage, some residents have taken to burning the rubbish.

But this only replaces the stench of rotting garbage with columns of nauseating smoke in the streets of the capital.

Tripoli's trash turmoil isn't a new phenomenon but it has reached alarming proportions in recent months.

Municipal rubbish trucks no longer collect waste because the city's main landfill is on a frontline.

The dump is at Sidi al-Sayeh, 45 kilometres (28 miles) south of Tripoli, where forces loyal to the capital's UN-recognised Government of National Accord (GNA) are battling those of eastern strongman Khalifa Haftar, who launched an offensive on April 4 to seize the city.

Doukali seems more angered by the rubbish than the fighting.

"Is it up to citizens to collect the garbage now? Why doesn't the government and the municipality provide skips in every neighbourhood?" he asked.

Tripoli's trash turmoil isn't a new phenomenon in the city, but it has reached alarming proportions in recent months. By Mahmud TURKIA (AFP)

A furious passerby interjected: "I'm talking to the government of the east (which supports Haftar) and that of the west (the GNA): keep your ministerial portfolios and the money, but find a solution to this rubbish crisis because it's making us sick."

Without long-term solutions and as long as fighting continues, "the crisis will worsen", said Tarek al-Jadidi, director of environmental protection at the National Centre for the Prevention of Diseases in Tripoli.

"In addition to the lack of environmental awareness among citizens, the state is unable to manage the rubbish in the streets, while ongoing conflict prevents the implementation of plans like in other countries," Jadidi said.

In theory, waste management in Tripoli takes place in stages, with rubbish being taken first to collection points and then onwards to the main landfill.

But with the landfill in a combat zone, collection points are overflowing. Rubbish sorting and recycling are out of the question.

Fed up by the smell and the sight of rats and stray cats feasting in the garbage, some Tripoli residents have taken to burning the rubbish. By Mahmud TURKIA (AFP)

Rouqaya al-Hachemi, an environmental researcher, recently conducted a study on the rubbish crisis in Tripoli.

She found that respiratory illnesses and skin conditions have clearly increased among children, the elderly and pregnant women.

"People are aware of the environmental risks and dangers of garbage fires but they complain about a lack of skips," she said.

To resolve this chronic crisis, Hachemi recommends "the creation of a ministry of environment to manage the rubbish situation, and laws to punish offenders".

Waste management may not seem like Libya's most pressing issue, but ultimately, Hachemi said, "it's about the health of citizens".