Site All Decentralised Departments Of RCC At Damongo — Yagbonwura Demands 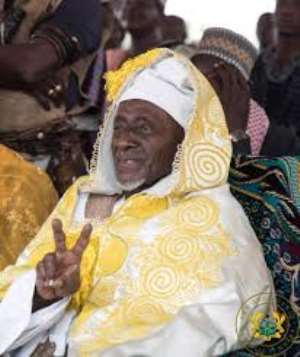 The Overlord of the Gonja Kingdom, Yagbonwura Tutumba Boresa I, has asked the Savannah Regional Minister to ensure that all the decentralised departments of the Regional Coordinating Council are located at the Regional Capital, Damongo.

Ghanaian Times and Daily Graphic publication of September 24, 2019, advertised for the construction of regional offices in a decentralised manner for all the six newly created regions.

In an interview with PAD FM after a closed-door meeting with the Regional Minister, the Registrar of the Gonja Traditional Council, Mr.Abutu Kapori disclosed that it will be a betrayal of trust if Yagbonwura accepts a region with such dispersed departments.

According to him, the Overlord has directed the minister to relay to government that he has not accepted and will not accept such an arrangement.

"Yagbonwura wants all the regional departments to be sited at Damongo....This was the reason why he demanded for the region.Yagbonwura says if he was to be aware that this was the way the region was going to be structured,he wouldn't have demanded for it.When you look at the youth that came to my palace to protest against the decision,they are made up of different tribes.The teaming youth have indicated that they will feel highly betrayed and disappointed if the Overlord accepts such a decision, since that was not the region they fought and voted for," he reiterated.

He appealed to the youth to remain calm whilst Yagbonwura intercede on their behalf to resolve the standoff.

The Regional Minister assured Jira that as a messenger, he will accordingly carry his concerns to the president.

The youth of Damongo under the auspices of Damongo Youth Parliament(DYP) in an earlier meeting with the Regional Minister and his entourage at the RCC maintained their earlier stance.They believe dispersing the coordinating departments will unnecessary increase administrative cost and affect the efficiency and effectiveness of these departments in coordinating development within the region.

"They said the decision to decentralise beyond the unsubstantiated justifications is an afterthought. According to them, instead of decentralising departments, let's rather concentrate on decentralising development and improving the working of the various district assemblies in the region.

"We are fighting for the best interest of the entire region and not for an individual or some groups of people.We are the voices that must own the region and we must stand for the region for the seek of posterity, "Mr. Ananpansah B Abraham, one of the youth leaders disclosed in an interview with Akilu Gideon of PAD FM.

Meanwhile,the chairman of the liaison committee that canvassed support for the creation of the region believes the Overlord is not being given the right briefing.

He argues that the decentralisation is a state policy and once we're in a unitary state and not a federal state, the people of the Savannah Region must not be seen as taking a position that flouts state policy.

He stated that practical decentralisation such that various departments are spread across the districts was key in the argument for the creation of the Savannah Region.

And that the impression should not be created as if the Regional Minister was behind the current policy.

Most social media commentators have however, described his stance and arguments as flawed and lame since the region must be owned by the people.