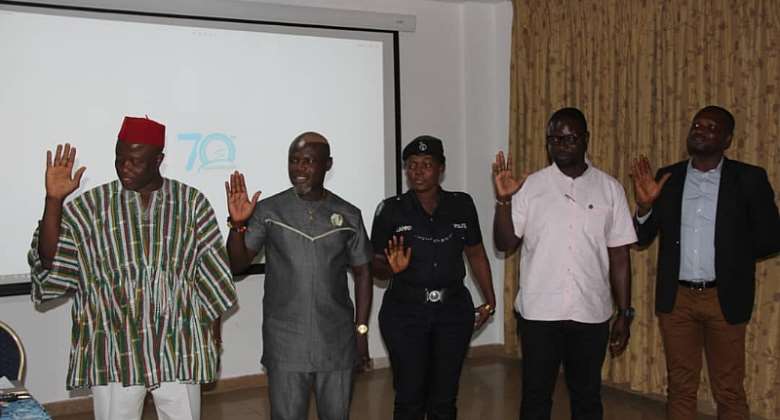 The scheme seeks to recognize hardworking members who have through their stories contributed significantly to the development of their communities and the country.

The award scheme would also honour members who have retired from active service.

On Tuesday October 1st 2019, the Western Regional Minister Kwabena Okyere Darko Mensah, in collaboration with executives of the Association, launched the award scheme.

The Minister also inaugurated the Awards committee to begin work on entries.

The Registrar of Takoradi Technical University (ATTU) Moses MacLean Abnory, has been appointed as Chairman of the Awards Committee.

Speaking on behalf of the group, the Chairman of the Awards Committee assured members of the Association Moses MacLean Abnory said they would discharge their duties fairly and impartial.

He noted that they would look for quality in the entries and reward hardwork during the vetting of the stories.

He, therefore, entreated the other members to give him the maximum cooperation to steer the affairs of the committee.

The Western Regional Minister Kwabena Okyere Darko Mensah who launched the award scheme appealed to journalists in the region to help promote indigenous businesses to grow so that they can serve the people living in the region.

He also called for the development of professionalism in the discharge of their duties as media practitioners.

Lawyer Fiiffi Buckman who chaired the function also charged journalists to commit themselves to the Western Agenda which is to create opportunities in Western Region for everyone.

He said journalists in Western Region were as good and hardworking as any other journalist any where.

He tasked journalists working in the region to constantly apply professionalism in the discharge of their duties without fear or favour.

The Metropolitan Chief Executive (MCE) for Sekondi Takoradi, Anthony K.K Sam was also there to grace the occasion.

The awards to be given out on the special day are seven in number, but the seven would be accompanied with additional recognitions including honorary, citations, among others.

The criteria for the selection of qualified entries and qualification of stories were all spelt out.

The Ghana National Gas Company (GNGC) and Ghana Manganese Company (GMC) are so far the main sponsors who have registered their interest in sponsoring the awards.

Whereas GNGC has promised to offer thirty thousand Ghana cedis (30,000), the GMC has offered to provide laptops and tablets for award winners.