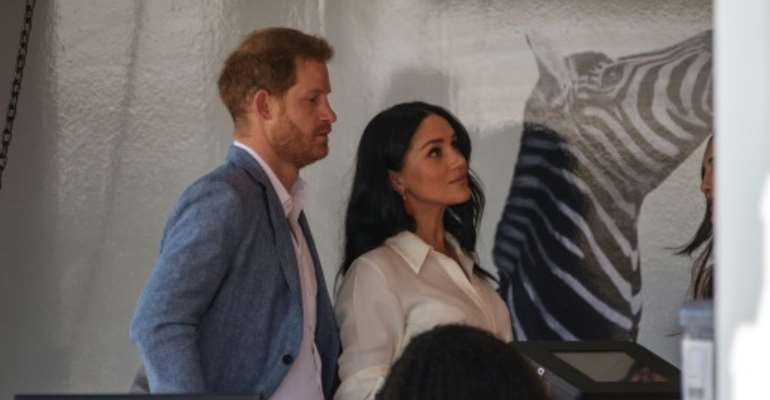 Helping hand: Prince Harry and his wife Meghan, the Duchess of Sussex, at a youth employment hub in Johannesburg. By Michele Spatari (AFP)

The Duke and Duchess of Sussex on Wednesday wrapped up a marathon tour of southern Africa by visiting South African President Cyril Ramaphosa after pledging millions for skills training for jobless youngsters.

The royal couple were welcomed by Ramaphosa and first lady Tshepo Motsepe in the capital Pretoria, where they exchanged gifts.

South Africa is battling stubbornly high unemployment levels at over 27 percent -- soaring to over 50 percent among young people.

"Africa needs to create 20 million jobs by 2035, and while youth unemployment is a global challenge, it's particularly a problem here where nearly 57 percent of young people are unemployed," the prince said.

"Yet I have seen strength, resilience, a sense of hope and empathy that I can only aspire to replicate," he said.

The pressure is mounting for Ramaphosa, who vowed to reduce unemployment to 14 percent in the five years after his election in May.

The royal couple -- who also carry the titles of Duke and Duchess of Sussex -- also spoke at the residence of the British Trade Commissioner Emma Wade-Smith, focusing on the importance of investments and business between Britain and South Africa.

The UK was South Africa's sixth largest global trading partner in 2017, with total trade at 79.5 billion rand ($5.18 billion, 4.76 billion euros), according to the presidency.

"When Africa prospers, the world prospers," Harry said,adding that the Africa Investment Summit, hosted in London next year, would be a "fantastic" opportunity to showcase Africa's potential.

Meghan reflected on the inner strength of Africa's female entrepreneurs in the face of economic and social challenges.

"At our visit earlier this morning I was struck by a small sign that was posted on the wall for the female entrepreneurs -- and it said: "visualise your highest self, and show up as her'," Meghan told the audience.

"This is the spirit of the women and girls I have met on this trip."

She shared a warm embrace with Harry, whom she last saw in 2015.

Machel, who does development work with women across the continent, told the duchess she was certain they would be working together in the future.

It was Harry and Meghan's first official tour as a family since their son Archie was born in May.

Little Archie also had the privilege of meeting one of South Africa's iconic anti-apartheid figures, Archbishop Desmond Tutu at his home in Cape Town.

In those southern African states he advocated against illegal wildlife trade, and called for governments to act to slow down climate change and bolster conservation efforts.

In Angola Prince Harry paid what he described as an "emotional" visit to a street that was still a minefield when his mother Diana visited in 1997, shortly before her death.

Akufo-Addo is sleeping on the job, he’s a failure – Ofosu Am...
21 minutes ago