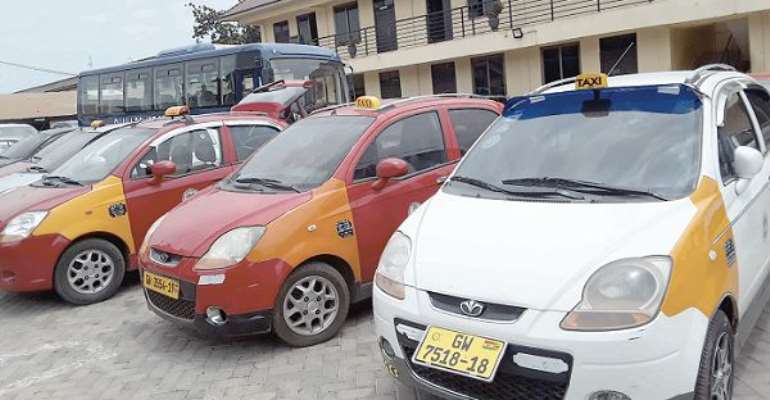 Some of the impounded vehicles at the Accra Regional Police Command

The police have started a crackdown on cars with tinted windows in the Greater Accra Region.

The action, the police say, is to check possible crime by drivers who may hide behind the tinted film to carry out their nefarious activities.

The operation, codenamed "Operation tinted windscreen", was carried out by the Intelligence Unit of the Accra Regional Police Command, in collaboration with the Central Motor Traffic and

Transport Department on the Spintex Road and Accra New Town.

Within hours of the start of the operation last Wednesday, about 30 vehicles were impounded.

So far, 15 owners of those vehicles have suffered court fines between GH¢350 and GH¢480 each after they appeared before the La Motor Court in Accra and were compelled to remove the tints.

All the vehicles impounded were salon vehicles used for commercial purposes, including taxis and others that use other Internet applications for their operations.

Law
The Deputy Public Relations Officer of the Accra Regional Police Command, Inspector Bright Kwabena Danso, told the Daily Graphic that driving a vehicle with tinted glasses was illegal and the police had recorded incidents of some people using such vehicles for the wrong reasons.

The deputy PRO said in recent times, with an upturn in celebrity culture and the youth wanting to mimic that lifestyle, car window tinting had been on the rise.

Tinting the glasses of windows, he said, had been seen as a symbol of status and lifestyle, while others saw it as a security measure or for privacy.

“Vehicle owners must know that there are strict laws around its application. To some people, tinted windscreens do have aesthetic value, and can serve as some level of safety, but they must remember the implications and the law,” he said.

He said a number of serious road accidents in recent years have cited tinted glass as a contributory factor.

Mr said most of the vehicles which were impounded had the front and rear windscreens and their windows all tinted.

“In relation to the recent cases of kidnapping and other forms of crime, it is important to identify the occupants in these vehicles,” he said.

Aim
The exercise, he said, was ongoing to ensure the safety of users of vehicles and other road users.

“We actually realised that it was usually the drivers and not the owners of the vehicles who put tints on the vehicles. We are starting a mass sensitisation so that people can remove these tints without the intervention of the police,” he said.