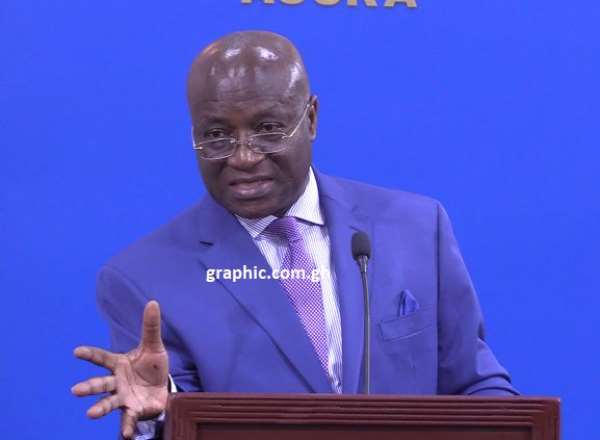 The Minister of Parliamentary Affairs, Mr Osei Kyei-Mensah-Bonsu has said majority Members of Parliament (MP) are not interested in the legislative work of Parliament.

Consequently, he says out of the 275 Members of Parliament, only about 50 of them participate in the law making process of the House.

Speaking at a press conference in Accra on Wednesday, Mr Kyei-Mensah-Bonsu said that was why many MPs are always absent from the House.

He said due to the influence of money which often plays a key role in the election of MPs in Ghana, many of those who are elected are sometimes not too interested in the core business of Parliament.

“Oftentimes, when it comes to making laws, you don’t see more than 50 people in the house,” he said and urged political parties to relook their processes of electing people to contest on their tickets as MPs.

“And of the 50 that you may see, the business of crafting legislation will rest on not more than 20 people of the House out of the 275. What is the reason for this?”, Mr Kyei-Mensah Bonsu, who is also the Majority Leader in Parliament said this when he took his turn at the Meet the Press series in Accra on Wednesday, October 2, 2019.

He briefed the media on four major projects that the Ministry of Parliamentary Affairs has undertaken since its inception in 2017.

He said the Ministry has engaged MPs, Metropolitan, Municipal, and District Chief Executives (MMDCEs) in the country as part of efforts to help improve the relationship that exists between MPs and MMDCEs.

He noted that the Ministry had also held dialogues with the core and expanded the leadership of Parliament on six different occasions with the view of enhancing the interface between the Executive and the Legislature.

The third major achievement of the Ministry, Mr Kyei-Mensah Bonsu, highlighted was the engagement with the Civil Society Organizations (CSOs) and the Media with an overall objective to deepening transparency in relation to accountability.

He said the Ministry has also engaged stakeholders across the country to find solutions to the menace of monetisation of politics in the country.

According to him, the growing trend of monetisation in the country’s electoral processes has reached an alarming proportion, thus becoming a national crisis.