Bears drive sheep farmers to the edge in Pyrenees: Pt. 2 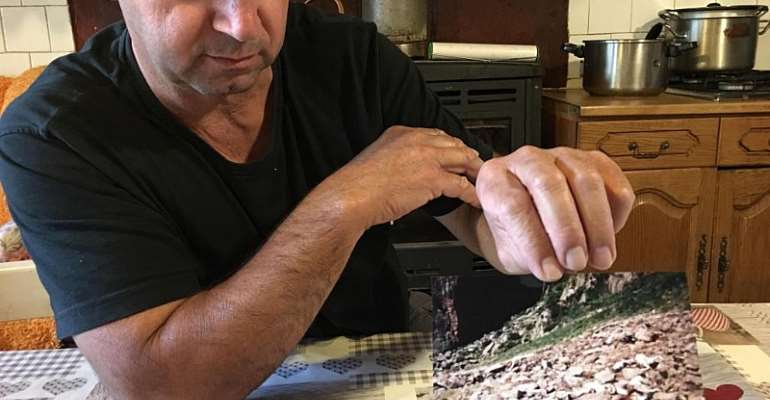 More than 600 sheep have died after falling off cliffs in the French Pyrenees this year in losses linked to the growing number of brown bears in the mountains. This second of three features explores the repercussions of the losses on one farmer.

Jean-Pierre Mirouze is one of three farmers who sends his sheep to graze in the mountains above the town of Aston in the French department of Ariège. Some 1,300 animals were to spend the summer months on 1,900 hectares of mountain pasture.

In June, 265 sheep died after plunging off a cliff. Of them, 186 were his own, representing nearly a quarter of his flock of 770.

“It happened four days after we sent the sheep up the mountain,” he recounts. “In the morning, my brother saw that many of the animals were missing and that vultures were gathering about an hour and a half's walk away.

“He came to a place where there's a steep cliff, where the sheep generally have no trouble grazing. He saw the sheep piled up at the bottom, where they'd fallen after tumbling over the edge.”

Mass falls a growing concern
They discovered bear tracks in the vicinity and understood the sheep had fallen when the predator scared them into a narrow passageway.

It was not the first time Mirouze was affected by such an event. Some 160 sheep died in a similar incident on his pasture in 2005.

It was also not the only such incident in the Pyrenees this year. Elsewhere in Ariège, 61 sheep plunged to their deaths in July, and another 46 died in August.

In early September, a bear reintroduced into the Bearn region last year became the primary suspect after 250 sheep died and more went missing in the Hautes-Pyrénées department west of Ariège.

Disagreement over protection
Mirouze is eligible for compensation of about 195 euros for each animal lost as a consequence of the fall. But he refused to sign the analysis of the incident for three months because the initial version omitted that a shepherd was present.

“Even though the attack was attributable to a bear, the inspectors forgot, or intentionally neglected, to check the box that said a shepherd was present,” he says, signalling a detail that cuts to the heart of what upsets farmers about the French government's conservation plan.

“I insisted on this correction, because they often tell us that we don't protect our animals. They say if we did protect the flock, the bears would not attack. But I know that a flock can be attacked whether it's protected or not.”

By mid-September, the state office agreed to the correction he requested. But even with the compensation, which he estimates will be a bit more than 36,000 euros, he expects he will eventually incur losses of 70,000 euros.

Nor does it cover unborn lambs, lost productivity due to stress among the surviving sheep, or the long-term process of building a functioning flock. Mirouze even anticipates having to repay much of the compensation in taxes.

For now, the fourth-generation farmer wants to continue with transhumance, the practice of letting sheep graze freely on mountain pastures during the summer months. But the prospect of keeping a smaller flock in hopes of avoiding future incidents would prove difficult for a family operation.

“Today, I run the farm with my three brothers. If we don't go to the mountain, or if we have to sell three-quarters of the flock, it will be a big problem,” he says.

“The other option is factory farming, with the flock kept inside year-round, poorly fed, yielding a poor quality product. If that's what the government wants, they have to let us know. But it's not what I want to do.”

Concerns for future of Pyrenees
Many farmers are worried about the future of pastoralism, and Mirouze warns that and end of transhumance would cause other mountain activities to suffer, as well.

“Lodges would deteriorate without anyone taking care of them, people would lose their jobs, and it would be expensive to maintain the mountains for the ski slopes, which our animals do right now at no cost,” he cites as examples.

Mirouze and others have requested that the government considers building a wildlife reserve to keep the bears separate from farming and tourism sectors, a proposal that goes against the principle of cohabitation at the heart of the bear conservation plan. But this plan is causing worry among many in the region.

“If farmers stopped working on the mountain, it would take 20 to 25 years to rebuild a system like the one we have today,” Mirouze says. “I'm not sure many people are grasping that.”