Hard times for shopkeepers in the shadow of Notre-Dame 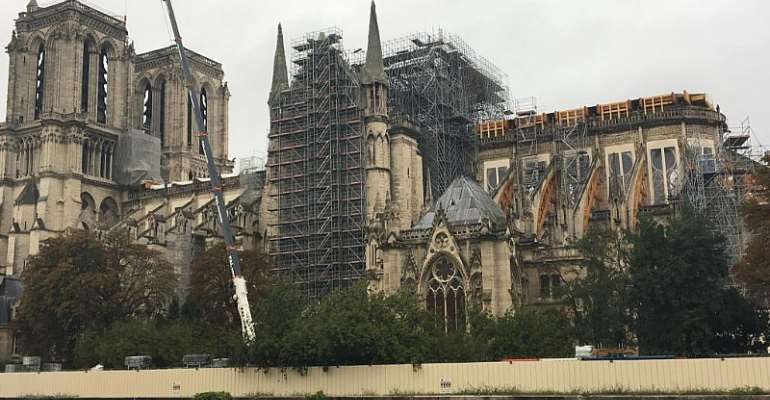 The closure of Paris' Notre-Dame cathedral following the blaze in April has hit local small businesses hard, as they struggle to cope with the drop in tourism. And reports of ongoing lead pollution threaten to make matters worse. But retailers insist there's no need to panic.

Notre-Dame cathedral is wrapped in scaffolding. The plaza at the front is blocked off and a long plastic fence along the cloisters side prevents you from getting within 20 metres.

“This is as close as you can get,” says Sandy Miles from Peru, taking a selfie of herself and her parents with the worksite in the background. She doesn't care there's a crane in the frame.

“Of course it's difficult to appreciate the whole attraction, but the most important thing is for tourists to be close to it, even if it's been through an incident like that.”

Before the blaze on 15 April, the cathedral attracted some 30,000 visitors a day.

There are still some foreign and French tourists milling around taking pictures of the injured cathedral, but they don't hang around and café terraces are near to empty.

“In economic terms it's a catastrophe. We've lost between 45 and 90 percent of our local business” says Michel Matthieu, treasurer of the Association des Commerçants de Notre Dame, which represents some 50 local cafés, restaurants and souvenir shops.

Matthieu has run his family's souvenir shop for 44 years but has never seen this kind of slump.

“I've lost 60 to 70 percent of my turnover since the catastrophe," he says staring into his expresso. "I use that word because it's both a spiritual loss for the cathedral and an economic disaster.”

We're chatting in one of the worst-hit cafés whose bird's eye view of the cloisters is now barred by a long, ugly, plastic barrier.

It used be open 365 days a year, now it's closed two days a week,” Matthieu explains. “It's had to lay off most of its 30 staff. Other cafés and brasseries will be laying off staff too.”

350,000 euros to help out Local shopkeepers are relieved to hear that after teething problems, pledges to donate €380 million to help reconstruct the Cathedral have now been confirmed.

They don't expect donations, but in June economy minister Bruno le Maire did promise a €350,000 bailout.

They've yet to receive a cent, “And even if we do it will amount to just €7,000 per business," regrets Matthieu.

He tries to remain cheerful, but admits some of his colleagues “have become seriously depressed”.

Some 440 tonnes of lead in the roof and steeple melted during the fire, and winds spread the particles beyond the church's grounds.

In July an environmental protection group Robin des Bois (Robin Hood) filed a complaint at the Paris state prosecutor for “endangering the lives of others”.

Its research showed lead levels in some areas around Notre Dame were still eight times higher than safety guidelines recommended.

“200,000 micrograms (μg) per square metre was found on the riverbanks, on booksellers' boxes and up to 1km away from Notre Dame,” Jacky Bonnemains told RMC TV in September.

Tourists, though, are not necessarily aware of the risks.

“Lead? I didn't know, I don't read the papers," says Juan Guanantano from Spain. “I wasn't worried but I am now. Maybe I wouldn't have come.”

Others, like Paula and Steven Allbright, visiting from the US, are more philosophical.

“It's a valid concern,” says Paula. “But we're old folks,” chimes in her husband. "If there's lead everywhere, well we're all sharing in it and that's life.”

'This is not Chernobyl' On 18 September, Paris City Hall launched a plan of action to continue monitoring and de-contaminating schools and public parks in the area. Local café owners and shopkeepers have been tested for lead and their premises de-contaminated.

The French regulatory threshold for concern over lead poisoning in children is between 25μg and 50μg per litre of blood. More than 50μg requires treatment.

“The tests show I have 21μg, my wife 31μg," says Matthieu. "And we were here all night, we live here. Tourists passing through are not at risk.

"We don't have many clients as it is. If it turns into a sort of Chernobyl and people stop coming because they think it's dangerous, that's not good," he says. "There's no need to panic."

Doubts over an ephemeral Notre Dame Decontaminating and consolidating the monument will take until June 2020 and only then can reconstruction begin.

“What we'd like in the meantime is at least for some kind of passageway to be created so people can reach us from the RER and metro lines rather than having to go on this big detour,” says Matthieu.

Longer term they'd like to see prayer sessions and ceremonies on the plaza and workshops around the different trades involved in the restoration.

Sticking it out The challenge they all face is to weather the storm for five years, possibly more.

Philippe Villeneuve, chief architect in charge of the restoration, recently cast doubt on Emmanuel Macron's promise to rebuild the cathedral within five years.

"In five years, we can rebuild the vaults and the roof, we can reopen the church to both worshippers and public. But not much more.”

Michel Matthieu doesn't know if he can stick it out until the cathedral reopens and visitors flood back.

But he takes inspiration from his grandmother who first settled in the area in 1921.

"My grandmother got through the Great Depression and WW2. It was tough, there was a lot of unemployment, but she survived. I hope we can do the same."

This story was produced for the Spotlight on France podcast. Subscribe on iTunes or Google podcasts.