NDA To Sell Off SADA Tricycles 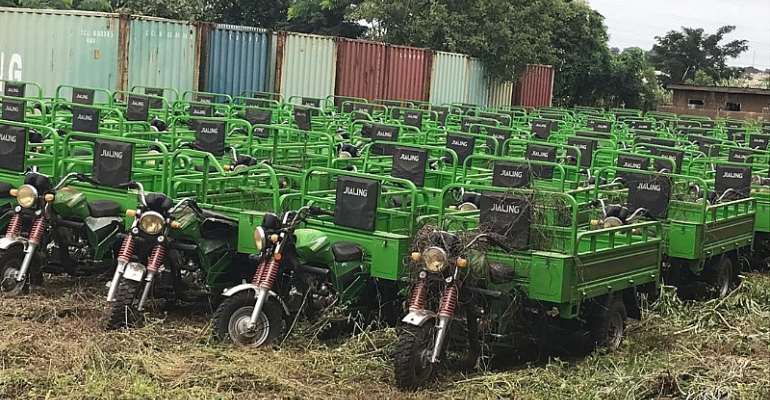 The tricycles were procured to support the youth but have been left to rot.

In 2015, the defunct Savannah Accelerated Development Authority signed a public-private partnership agreement with Unik Savannah limited for the procurement of 5,000 tricycles at a cost of 9,500,000 dollars.

This initiative was aimed at alleviating the high level of poverty in the then SADA operational zone.

However, these initiatives were fraught with challenges.

Out of the 5,000 tricycles that were imported, 3,000 were assembled, 2,239 were sold, leaving 732 tricycles under the mercy of harsh weather conditions, resulting in a depreciation of up to 60% according to the latest valuation of the State Transport Company Limited.

Addressing the press in Tamale on Tuesday, the acting CEO of the Northern Development Authority Dr. Abdul Majeed Haroun stated that out of GH¢33,649,200 expected from the sale of the tricycles, only GH¢1,258,271 payment have been made by beneficiaries.

“Out of the total of GH¢33, 649, 200 expected from the sale of the tricycles, only a woeful GH¢1,258,271 payments have been made by beneficiaries (i.e. under 4%) leaving an outstanding balance of GH¢32,390,929. This 96% loss totaling over eight million dollars to an Economic Zone that the UNDP in their 2018 Human Welfare study acknowledge as the poorest in Ghana is unfortunate and constitutes a serious financial loss to the state,” he said.

Dr. Haroun highlighted some steps taken by the current management so far to recover the debts.

“We had to make a complete study of the situation to understand who, what, when, and how and therefore we have contacted within the last few months some of those that were reported beneficiaries and have tried to make some recoveries. We had to clear a few and understand exactly what the situation had been with records to support that before going after them,” he said.

He further announced that management in the coming days will begin the sale of the tricycles and also prosecute persons when the need arises.

“We are happy to announce that the many hurdles have been called and management is set to begin sales within the next couple of weeks. We are by this urging those who are still indebted to the authority to make efforts in settling their indebtedness before they are named and shamed,” he said.

Meanwhile, in a separate press conference, the National Democratic Congress (NDC) responded to the statement saying it is an attempt by NDA to devaluate the tricycles and sell to their party boys.

The Savannah Regional Communication Officer for the NDC, Malik Basintale spoke for the party:

“Their statement reads 'Thus no proper facility was provided for the assembled tricycles leaving them under the mercy of the weather for years'. But in your own press conference, you said that this transaction took place in only 2015 and we left office in 2016. Where were the years? In other words, you should hold yourself responsible because you have had three years of leaving them under those weather conditions you claim we have left them.”

He exclaimed, “This is another critical point. You invite STC to come and value what we have left under harsh weather conditions and you claim that they have valued the unassembled tricycles that were left in the containers and realized that they had devaluated. This is an attempt to share our tricycles to your disappointed NPP members in the name of salvaging their poverty situation. We would not permit you to use SADA as salvage to that situation.”