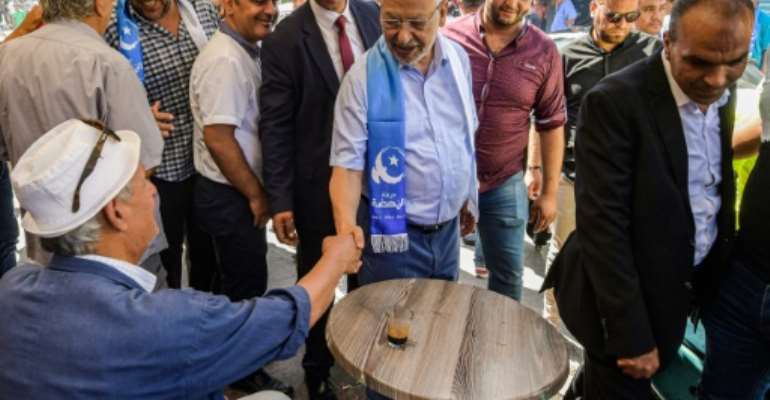 Rached Ghannouchi, longstanding head of Tunisia's Islamist-inspired Ennahdha, has taken to the streets in his first legislative election campaign in the wake of disappointing results for the party in a presidential poll.

At 78, Ghannouchi has led Ennahdha since it was founded almost 40 years ago, carrying the movement to victory in 2011 elections, just months after the party reemerged from underground following the revolution that ousted autocrat Zine El Abidine Ben Ali.

A divisive figure, Ghannouchi who has never run for office is standing for the first time in the October 6 legislative elections.

It was Abdelfattah Mourou -- a lawyer seen as a moderate -- who was the party's first presidential candidate, leading to his elimination in a first round of polling on September 15.

Turning up in a black luxury sedan to campaign in the streets of Bab Jdid, a popular neighbourhood of Tunis, Ghannouchi, wearing a simple button-down shirt, shook hands and spoke to constituents.

But three weeks after the presidential poll saw voters reject the governing parties, including Ennahdha, the welcome was lukewarm in the streets.

"We voted for them (Ennahdha) but today we are living on bread and water, that dog Ghannouchi!" said one resident, Fatima Kassraoui.

"Our sons found neither work nor hope here, so they've left secretly (for Europe) and they've disappeared. It's because of him," said the veiled woman in her fifties.

Tunisians blame the political class for a sluggish economy with high unemployment and inflation, persistent causes of social stress.

"They are thieves. We had a revolution and they are filling their bellies, but we have seen nothing but misery," another resident said.

A neighbour tried to convince him otherwise, saying: "Ennahdha is modern Islam, and they have been put in prison for their ideas" during Ben Ali's rule. 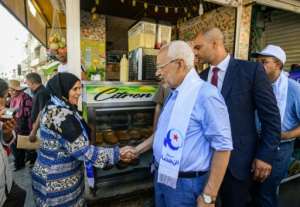 A divisive figure, Ghannouchi has never run for office, standing for the first time in the October 6 legislative elections. By FETHI BELAID (AFP)

Accusations of ties to jihadist groups have also resurfaced during the campaign, especially as Ghannouchi is running against Basma Khalfaoui, widow of leftist opposition leader Chokri Belaid who was assassinated in 2013.

Belaid's killing was claimed by jihadists linked to the Islamic State group, and while 24 defendants have been on trial over his murder since 2015, the case has been repeatedly adjourned.

Ennahdha has been accused of complicity in the assassination by its detractors, including Khalfaoui.

"We are used to going door-to-door, this discontent is democracy," said Imed Hammami, a former minister and current campaign manager for Ghannouchi.

But "given the results of the presidential election, we have decided to reduce the number of big meetings and be more modest to show our connection" (to the people), he told AFP.

Ghannouchi is running at a time when his position in the party has been challenged and he can no longer seek re-election as its leader.

The strategy of striking alliances with ruling centrist parties in the post-Ben Ali era has been criticised by Ennahdha's base and undermined the party's credibility as a force for change. 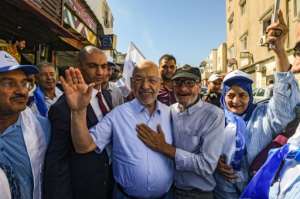 Ghannouchi is called "sheikh" out of respect by his supporters but has also faced strong criticism during his campaign. By FETHI BELAID (AFP)

In a first such act of insubordination in the ranks, Ghannouchi's former cabinet director Zoubair Chehoudi resigned in mid-September, calling on him to "stay home or at the mosque".

He condemned the intervention of the party head and his son-in-law, Rafik Abdelsallem, in candidate nominations, accusing them of working against women and young people.

Some polls ahead of Sunday's legislative polls expect Ennahdha to win less than 40 seats out of 217 in parliament, down from its current tally of 68.

Historian Slaheddine Jourchi warned that a fresh alliance with ruling parties would lead to a "division and collapse of the party", leaving Ennahdha no choice but to move toward the opposition.