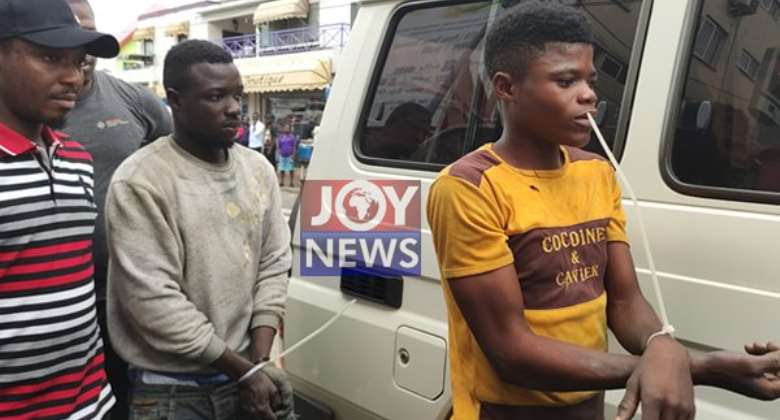 A brave taxi driver has caused the arrest of two suspected thieves who were hoping to make some huge cash from power cables belonging to the Electricity Company of Ghana (ECG) they had stolen.

The driver, Ata Asante, had picked the two men believed to be in their early 20s, from Iran Clinic at Akweteman in Accra but quickly diverted their route when he got wind that they might have stolen the cables.

The driver narrated to JoyNews that after he had picked them, he overheard the two men, Noah Agyei and Kwame Awazy, discussing in Ewe how much they will make from their booty.

Convinced that the men might have stolen the cables, he gave them a flimsy excuse and diverted their route to The Multimedia premises since he is an avid listener of Adom FM.

As soon as he reached The Multimedia premises, he raised an alarm which drew a large number of people who quickly subdued the suspects.

Mr Asante said he suspected that the thieves were part of a team doing some electrical works at the Iran Clinic area and as soon as officials of the ECG had left, the men decided to quickly make away with the cables.

They have been arrested by the Tesano Police who are currently investigating the matter.

The suspects told the police that they were sent by their master.