By Embassy of the United States of America (Ghana) 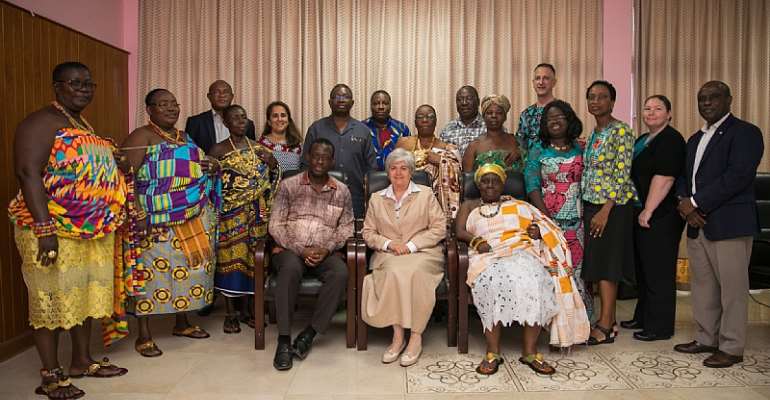 U.S. Ambassador to Ghana Stephanie S. Sullivan in a group photo with Government of Ghana and international partners after the launch of the new Joint Strategy for Achieving HIV/AIDS Epidemic Control for the Western Region in Sekondi on Tuesday, October 1, 2019.

Takoradi and Aboadze, GHANA— From September 30-October 2, U.S. Ambassador to Ghana Stephanie S. Sullivan traveled to the Western Region to join Government of Ghana representatives and the UNAIDS Country Director for Ghana Angela Trenton-Mbonde to launch the multi-stakeholder strategy to achieve HIV/AIDS epidemic control in the Western Region. The Government of Ghana and the U.S. government have set an ambitious target to reach epidemic control, fewer number of new HIV infections than HIV-related deaths, in the Western Region by September 2020. In order to achieve this goal, Ghana adopted the UNAIDS’ 90/90/90 Fast-Track goals to ensure that 90% of people living with HIV know their status; 90% of those who know their positive status receive treatment; and 90% of people on treatment are virally suppressed, meaning their HIV virus is controlled so they cannot transmit the virus, through consistent use of HIV drugs.

Out of the 334,000 Ghanaians who live with HIV, only 73% know their status, and fewer than half (45%) are on treatment. The Western Region has the largest population of female sex workers (20,000) in Ghana. This is due in part to a rise in natural resource extraction industries. The region also has the largest gap between the percentage of people living with HIV who know their status and the percentage of people with HIV who know their positive status and are on treatment.

During her trip, Ambassador Sullivan met with the Western Regional Minister Kwabena Okyere Darko-Mensah and selected Queen Mothers to discuss the new HIV epidemic control strategy and other development priorities. Ambassador Sullivan also visited Effia Nkwanta Regional Hospital, the 2nd Battalion Military Hospital, and the HIV clinic at Nana Hima Dekye District Hospital. She emphasized the importance of removing formal and informal user fees, which often prevent HIV positive patients from accessing services. The Ambassador interacted with “Heart to Heart Ambassadors,” people living with HIV who publicly share their life stories to address stigma and discrimination against people living with HIV and encourage others to be more tolerant and accepting. She also met with “Models of Hope,” peer counselors who help other people living with HIV/AIDS navigate through care and treatment services. “Models of Hope” play a critical role in linking individuals to treatment in an environment where stigma and discrimination remain significant barriers to access to HIV/AIDS services.

Following her visit to the Western Region, the Ambassador visited the Amandi Energy Power Plant in Aboadze, Central Region, which receives support from its American parent company, Endeavor. The power plant runs on natural gas and light crude oil and is preparing to generate power for the country. The Ambassador also visited the University of Cape Coast, where the U.S. government supports students to conduct practical research programs on fisheries and coastal management.

The Ambassador’s trip to the Western and Central Regions reinforced the strong partnership between the U.S. government and the Government of Ghana to promote health, education, good governance, and economic development in Ghana.

U.S. Ambassador to Ghana Stephanie S. Sullivan in a group photo with Government of Ghana and international partners after the launch of the new Joint Strategy for Achieving HIV/AIDS Epidemic Control for the Western Region in Sekondi on Tuesday, October 1, 2019.

Acting Director of the Ghana AIDS Commission Kyeremeh Atuahene speaking at the launch of the new Joint Strategy for Achieving HIV/AIDS Epidemic Control for the Western Region in Sekondi on Tuesday, October 1, 2019.